When Gale Banks decided to showcase one of his twin turbo Duramax diesel engines in a drag race vehicle, he wanted to start with a chassis combination that was well built, light, and proven. Naturally it had to represent a GM truck model. After a little searching, he found that Panella Trucking in Stockton, California had a rolling chassis 2001 Chevy S10 Pro Stock Truck for sale. 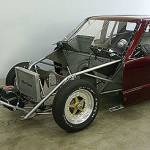 The Panella team had been strong competitors and ultimately Pro Stock Truck World Champions. They had taken delivery of this chassis to replace their very successful S-10 when the NHRA closed the Pro Stock Truck category. The truck was virtually brand-new when Gale bought it, having made only eight passes down the track. But even in that short time, the truck was running within .03 seconds of the rest of the field, demonstrating that this was a proven chassis with enormous potential. 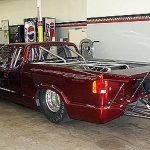 But this was not just any Pro Stock Truck, but an unusual Don Ness Racecraft built body/chassis with a swing arm rear suspension, instead of the conventional four link. Even the swing arm construction was different in that it offered six pivot point locations for suspension tuning rather than a single point as in a ladder bar style setup. It was also one of the lighter Pro Stock Trucks, and it was already painted RED, the only acceptable color for Gale’s race vehicles. Gale had to have it. 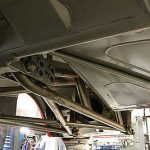 This view under the truck shows the swing arm rear suspension and a close look at the adjustable forward mount points. The advantage to using a swing arm-type suspension over the more traditional four-link is that it distributes power to both rear tires equally without transmitting any sort of torsional or twisting motion to the axle. This eliminates torque steer – a very real concern given the power levels expected from the race-tuned Duramax – and helps the truck launch in a straight line. While many swing arm designs offer no means of adjustability, this particular swing arm has six different forward mount points: three different pivot points on two levels. This design allows the suspension to be tuned for different track conditions. 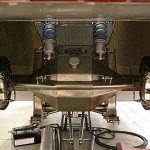 Chassis builder Don Ness paired the swing arm suspension with a custom-built axle housing and Lamb rear disc brakes. The brackets visible on top of the axle gusset and at the trailing edge of the swing arms are used to mount the truck’s wheelie bars, which also can be adjusted and tuned to help the truck’s launch. 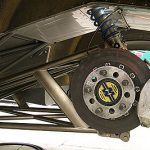 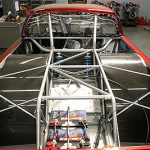 This overhead view of the Chevy’s bed area shows off the intricate chromoly tubing that makes up the truck’s rear half, the two Koni coilover shocks used to suspend the swing arm, and the truck’s batteries, mounted to the rear for optimal weight distribution. 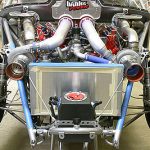 The Chevy’s front suspension is more conventional than the swing arm, utilizing Lamb Pro Stock struts. In this photo the coil springs have been taken off to test the suspension’s travel and measure how much clearance there is between the front tires and the twin turbochargers when the struts are at full compression. 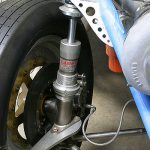 While the front coils were off, members of the engineering team were fabricating shock travel sensors that will mount to the struts to measure front-end lift at launch. Similar sensors will also be fabricated for the Koni coilovers at the rear to measure squat. All these data points will be evaluated and factored into the truck’s setup to optimize its launch characteristics. 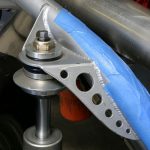 A close-up shot of the attention to detail this chassis received from the Don Ness fabricators. The blue tape on the cage is there to protect it as the turbo components are mounted, removed and remounted during their initial configuration.

View all of the race-proven products Banks has available for your vehicle.