A big engine’s gonn’a need a lott’a fuel! With the airflow potential of 1600+ horsepower from the two Honneywell/Garrett TR 72T turbochargers, the fuel system must supply at least 2-1/2 gallons per minute at full throttle. No, it won’t need this most of the time, but it must be there when called on. In an article in the July 28, 2006 Popular Mechanics, Ben Stewart observed: “The fuel rails alone are the size of V8 camshafts.” Actually, they’re bigger. 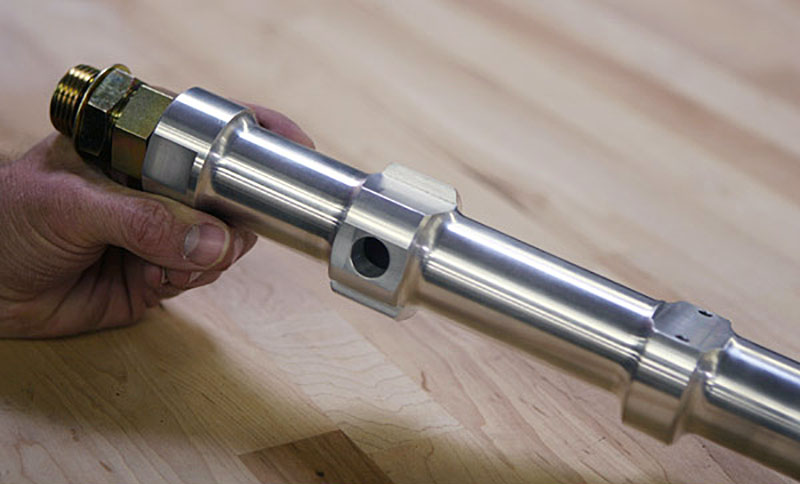 We chose to machine our own fuel rails from heavy-wall aluminum tubing with 2-inch outside and 1-inch inside diameters. This will give us the fuel volume we need and enough wall thickness for the injector inlet o-rings to seal. Unnecessary material was machined away between the injector and mounting bracket bosses to mirror the styling of the intake manifolds. 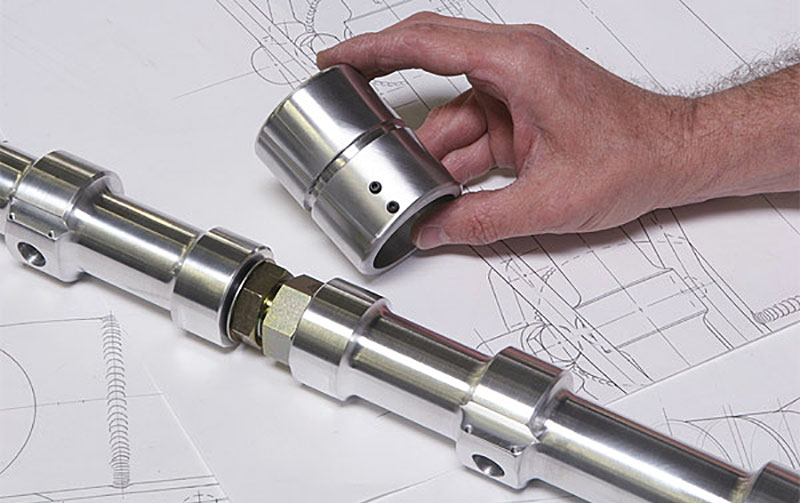 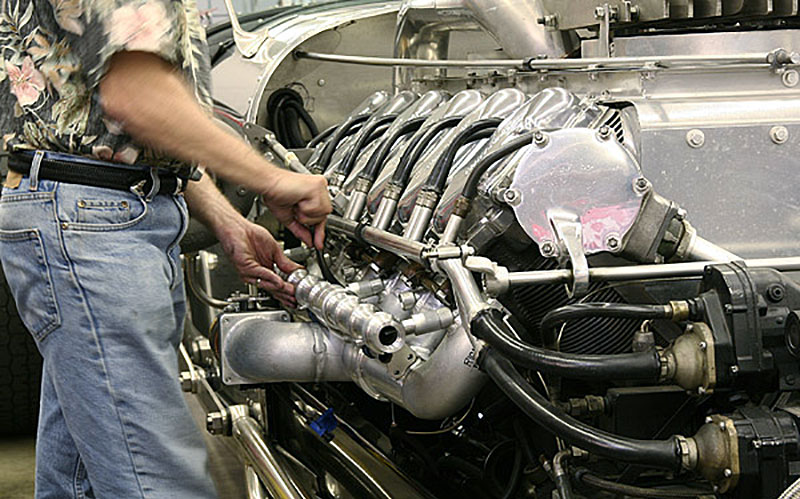 The fuel rail will nest just above the intake manifold and throttle body. We’ve machined up some dummy injectors to hold the rail in place while mounting brackets are fabricated. Fuel will enter the rear of each rail, and whatever fuel doesn’t feed the injectors will return to the tank through a regulator connected to the front rail fittings. 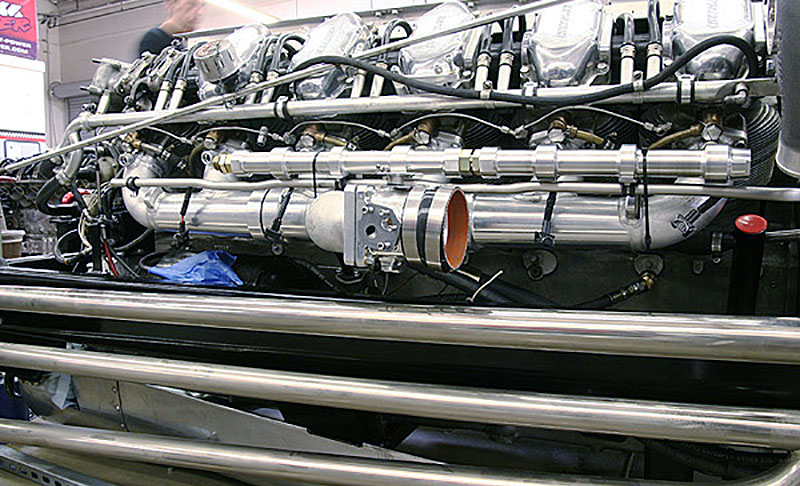 In order to retain the 50’s look of the engine, we’ve hidden the injector nozzle wiring in a stainless conduit tube that runs under the fuel rail. Here the throttle body has been mocked-up and the front section of the fuel rail removed while the wire conduit is fitted in place. The individual nozzle leads can be seen emerging from holes in the bottom side of the conduit tube. The upper tube just under the rocker covers is the shielded sparkplug wire loom. 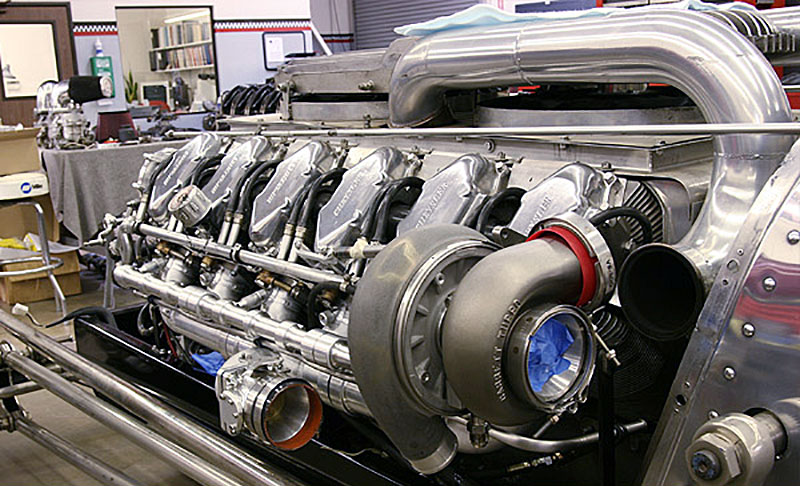 When you’ve got a vehicle as outrageous as Jay Leno’s Tank Car, you want to flaunt what you’ve got. Gale decided to mount the turbos outside of the cowl line where everyone will see ’em and the exhaust can run straight back alongside the body as it did originally. The front part of the exhaust system above the engine will be replaced with stainless tubing to feed the turbos. 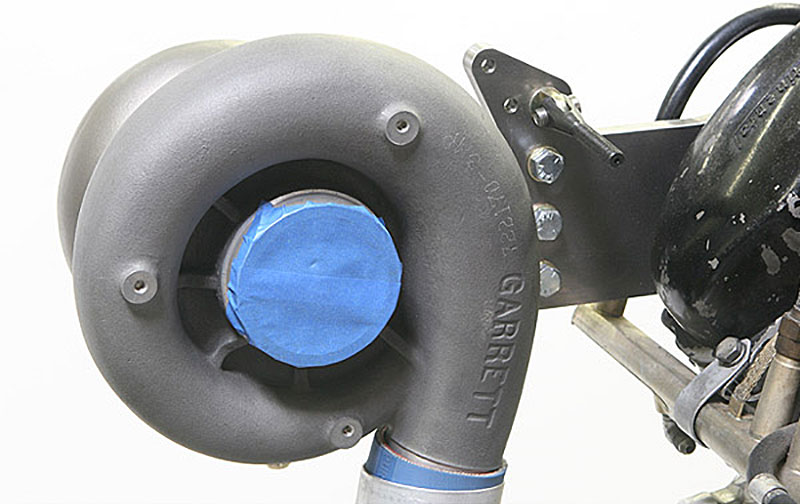 The turbochargers become the front mount points for the twin 10-foot long, 4-inch diameter tailpipes. Because they must carry not just the weight of the turbos, but also the wastegates and the exhaust system with its fore and aft loads, the turbo mounts must be stout. We designed them as a two-piece assembly that bolts to the rear cam cover flange on each cylinder bank. 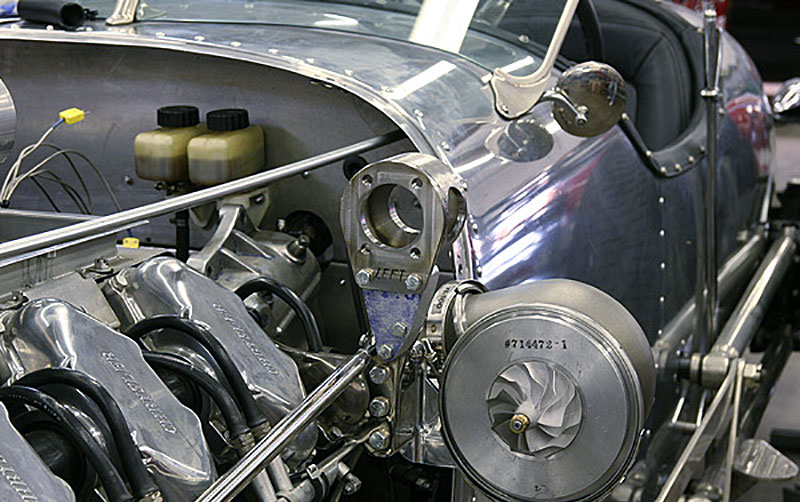 The outer half of each turbo mount supports the turbo by its oil drain flange and serves as a boss for the drain fitting. A strut rod runs from each mount to a bracket on the fourth rocker cover to resist fore and aft loads. Here the compressor cover has been removed from the turbo and a wastegate valve body is mocked up on the turbo mount. 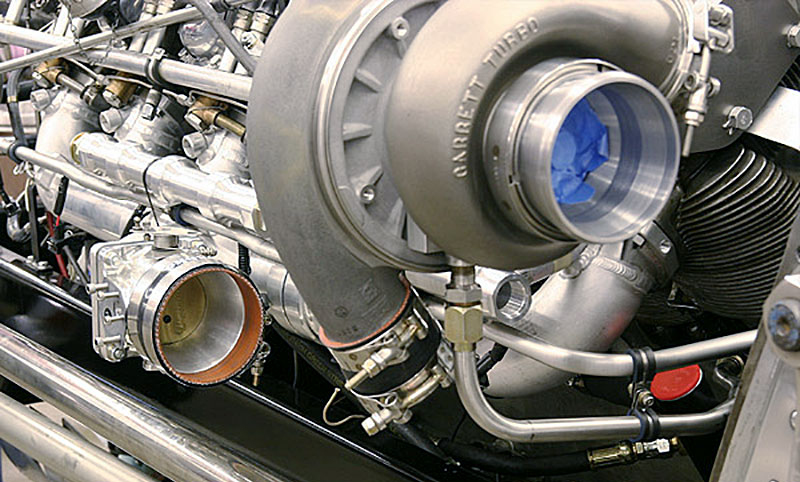 With the turbochargers in place, the look of the engine is starting to come together, but we’ve got a long way to go. The oil drain tubes are being made up and routed toward the crankcase. All of the major components will be on and off the car or mock-up engine 8-10 times during the coarse of the turbo system’s development. Be with us next time as we install the throttle bodies and fab-up the boost tubes.