Enthusiasts understand that a dynamometer measures an engine’s output by gauging its torque, taking measurements from the flywheel (in the case of an engine dynamometer) or a vehicle’s drive wheels (with a chassis dynamometer). A dyno, though, is a far more versatile diagnostic tool than a mere power reader. When the dyno is properly set up, there’s a world of data available to those savvy enough to interpret the information and use it for a wide variety of tuning purposes.

Case in point: the 6.6L LBZ Duramax engine under development for Banks’ Sidewinder S-10 drag race truck. As the second of two Duramax-powered race trucks under construction in Banks’ Advanced Concepts Engineering, the engine slated for the S-10 initially received many of the same upgrades as did the Duramax built for the Sidewinder Type-R road-race truck. Those upgrades not only increased the power output far beyond factory levels – to 650 horsepower and 800 lb-ft of torque – but also insured the engines’ durability while producing that much power under racing conditions. (story continued after photo gallery) 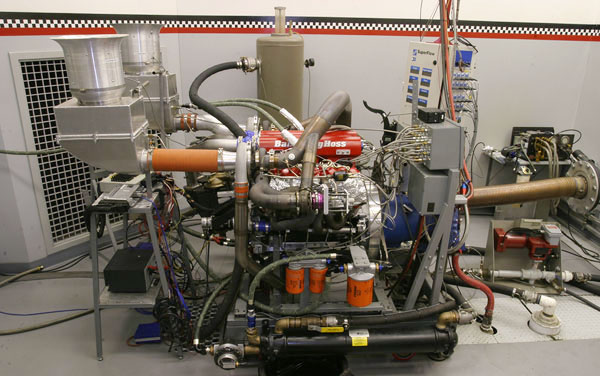 The Duramax turbodiesel slated for use in the Sidewinder S-10 drag race truck was hooked up to Banks’ Superflow engine dyno in the Number One dyno cell, the cell used for testing all of Banks’ diesel engine products. Cell Number Two, on the other side of the back wall, is set up for gasoline-powered engines. Note that in the time that elapsed between when this photo was taken and the others in this article, the intake air stacks at the left were replaced by tubes vented up through the roof. 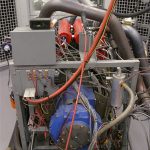 The Superflow dynamometer is a water-break dyno, which uses water pressure (in the blue absorber at the rear of the engine) to put a load on the engine during tests. That load simulates the resistance the engine will feel in the real world when it tries to accelerate the vehicle. The dyno measures the engine’s torque output by gauging the crankshaft’s twisting action against that load. 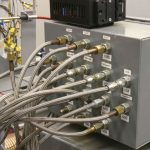 During each dyno run, dozens of temperature and pressure sensors send data points to the dyno’s computers to monitor the performance of various engine components. This box collects the input from 16 pressure sensors; another box elsewhere in the cell collects readings from 32 different temperature sensors. 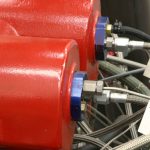 Here’s just one example of a data collection point: Sensors at the end of the intake manifold record the temperature (the hard line) and the pressure (the braided line) of the air inside the manifold. 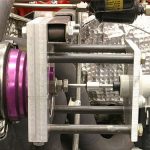 The engine is even set up with a device that measures the travel of the turbo’s wastegate. 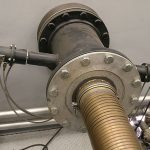 One data logger that’s exclusive to the diesel engine dyno cell is this opacity meter, which measures how dark the exhaust is leaving the engine. The meter works by shining a light through the exhaust and then measuring the percentage of visible light. Opacity, or the lack thereof, is an important measure of any diesel engine’s performance. Excessive smoke is an indicator of unburned fuel, which is power lost. 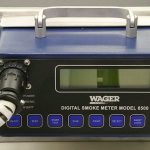 A clean burn is especially important for the S-10, as Banks wants this truck to be a clear departure from the “Smoke Boys,” who have erroneously equated the belching smoke produced by their drag race trucks with diesel performance. 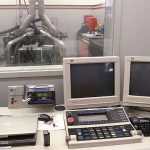 Here’s the view of the dyno from the operator’s control room. The engine can be started and “driven” from here, while computers record all of the engine data. Depending on the sophistication of the dyno program, an engine can be put through simulated driving conditions – mirroring how the engine’s speed will rise and fall as it laps around a road-race course, for example. Drag race conditions are harder to simulate on the dyno, because the operational time is so short during a quarter-mile pass. Instead, the testing will encompass measuring data at the various rpm points the engine will go through during a typical run. 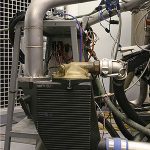 To simulate the chilling effect of an air-to-air intercooler mounted on a moving vehicle, the Banks’ dyno uses these air-to-water intercoolers, which are charge-air coolers used with Cummins diesels in marine applications. 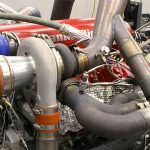 When the intake air leaves the turbocharger, the act of compressing it has heated it – to upwards of 400 degrees F. It’s the intercooler’s job to bring those intake air temps back down to around 110 or 120 degrees F. 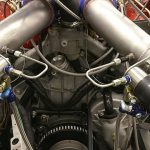 One critical part of the test is to determine the most effective way to deliver the nitrous. The Duramax on the dyno has been fitted with two nitrous injection solenoids, one on each intake tube. Four different nozzle sizes were tested to see which would deliver optimal nitrous flow. 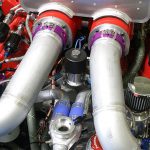 Banks’ engineers are also experimenting with a single, central nitrous solenoid split to two nozzles. This would be a simpler system, but would require longer lines between the solenoid and the nozzles than the setup shown above. The single solenoid system was mounted to the demonstration engine seen when the truck was displayed at the SEMA Show. 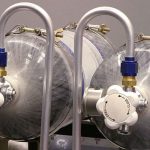 Banks plans to run two nitrous bottles when the truck races. This wasn’t done for total nitrous capacity, but to maintain consistent nitrous pressure through the run. The pressure in a single tank drops too much by the end of the pass to deliver the nitrous consistently. This update was written while the nitrous tests were still ongoing; we’ll report their results in a later update.

The competition conditions each truck will face are considerably different, however. The Type-R needs to sustain its power delivery over the long haul of endurance racing. The S-10, on the other hand, will produce even higher levels of power – in excess of 1,000 horsepower – in short, wide-open-throttle bursts, enough to meet Gale Banks’ goal of making this the first 7-second diesel drag-race truck. Not only will the truck be quick, it will be clean, too, making those ultra-fast passes without emitting the clouds of choking black smoke that characterize other diesel drag-race vehicles.

Meeting those power and emissions goals meant taking the S-10’s Duramax in a different engineering direction from the Type-R engine. One of the first tasks on the development agenda was to design, install and dyno test a nitrous oxide injection system.

Nitrous oxide has a long history as a power adder for gasoline engines, but its job in the S-10 goes beyond power-making. Introducing nitrous oxide into the diesel’s intake system, which adds oxygen to the intake air, leans the air/fuel mix. While this could be disastrous in a spark-ignited, gasoline-fueled engine, it actually helps the diesel by making it run cooler and more efficiently. The smoke you see pouring out of drag-race diesels while they power up at the starting line is unburned fuel – and wasted power. The addition of nitrous and its oxygen molecules will help that fuel burn, eliminating the starting-line smoke improving the engine’s efficiency.

This is where the dyno testing comes into play. When the S-10’s Duramax was initially hooked to the dyno, the air coming from the turbocharger’s compressor was plumbed through two air-to-water intercoolers to simulate the effects of the air-to-air intercoolers on the truck. The engine was then baseline tested to ensure it was producing its target 800 lb-ft of torque while fuel-injection rates, exhaust gas temperatures and other critical factors were optimized. Among the dozens of data points recorded during the baseline runs, temperature sensors in the intake system before and after the intercoolers tracked the cooler’s effectiveness.