How does Banks Six-Gun Diesel Tuner stack up against other tuner/programmers on the market?

All tuner companies make claims about horsepower and torque gains from their products. At Banks, we do more than just talk. We test. We put real-world trucks in real-world conditions to show just what you can expect from a Banks product.

With our Six-Gun Diesel Tuner, we took that testing a step further. Not only did we submit the Six-Gun to instrumented quarter-mile acceleration runs in measure of speed, smoothness and smoke-free operation, we compared it to several other tuners on the market. To keep this an apples-to-apples comparison, we installed all the tuning components on the same truck, used the same track (the Auto Club Raceway at the Pomona Fairplex, home of the NHRA Winternationals), performed all the tests on the same day, and used the same driver for each run. Because our goal was an accurate product comparison, we did all we could to minimize variables between runs. We did not make any other changes to the test truck to lower its elapsed times. The performance figures you see here are based solely on the effects the different electronic tuners had on the test truck.

Note: The PowerPDA used in this test has now been upgraded to the Banks iQ. 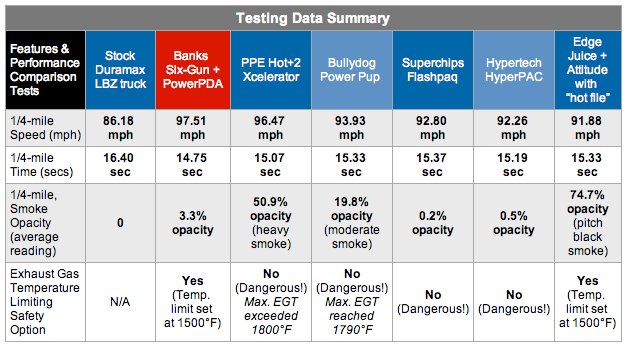 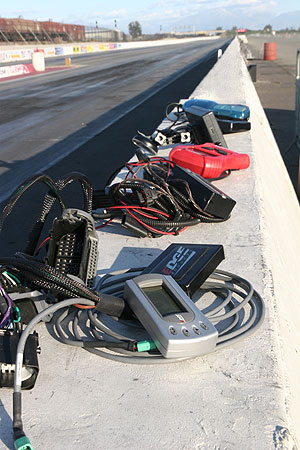 The quarter-mile times of the competing programmer/tuners were all slower than the Banks Six-Gun, by as little as .07 seconds (Edge Juice with Attitude) and by as much as .62 seconds (SuperChips Flashpaq). Yet the elapsed times tell just part of the story. Each of the competing products presented smoke and/or drivability issues that weren’t evident when the Six-Gun was used to tune the Duramax.

Among the Edge products, for example, the Hot File is clearly not worth the additional money that it costs because it simply cannot be used without setting a code, putting the vehicle into limp-home condition. The two highest settings with the Edge resulted in the highest opacity readings – the blackest smoke – during the test sequence. Excessive black smoke is an indication of wasted power and fuel.

The PPE Hot+2 Xcelerator has the highest advertised power numbers. The highest level that we could test has an advertised rating of 300 additional flywheel horsepower, yet it was slower in the quarter mile than the Six-Gun on level 6, which has an advertised rating of 100 additional rear-wheel horsepower. This is a clear indication that their horsepower claims are inflated. In addition, the highest power settings of their product are unusable under most conditions due to high exhaust gas temperatures.

The Bullydog Power Pup had the second highest turbine inlet temperature after the PPE Hot+2 Xcelerator at 1,791 degrees F. High EGTs are another indication of poor tuning. Because this product is a programmer, it does not offer the protection of an EGT limiting feature, and therefore it could seriously damage the engine.

Both the Edge and PPE products caused harsh, erratic shifting. The PPE product caused damage to the transmission resulting in slippage, a situation we uncovered when we tried to re-baseline the truck after testing all the tuner/programmers. The e.t.’s did not compare to the original runs due to transmission slippage, a condition that began to occur during the PPE testing.

The Banks Six-Gun Diesel Tuner clearly generated the best acceleration times throughout a day of no-holds-barred, head-to-head testing, in some cases by more than a half-second through the quarter-mile. Better still, the Six-Gun achieved its results with a minimal amount of smoke output, and maintained exhaust gas temperatures well within a safe range. A tuner/programmer shouldn’t kill your engine. But as you’ve seen, some of them could be hazardous to your diesel’s health. Don’t put your truck’s powertrain at risk. Choose Banks.

To minimize testing variables, all runs were done in the drag strip’s right lane. After a quick burnout before each run to clean the slicks, the test driver launched the truck from a standing start without torque braking. All runs were made with the transmission in Drive. The Allison typically shifted at around 3,200 rpm, and the truck reached Fifth gear by the end of the quarter mile.

We made a minimum of three runs with each product to make sure we were getting repeatable results. The quarter-mile data were evaluated per the NHRA’s method, with the elapsed time taken at the 1,319-foot mark and the average speed recorded over the last 60 feet. We used the best run from each group of runs as the basis for our comparison.

Because of the mild spring conditions on our test day, ambient temperatures varied only from 58 to 63 degrees F from the beginning of the test sequence to the end. Barometric pressure was 29.65, and relative humidity was 24 percent. We noted a headwind of about 10 mph during the entire test sequence.