Gale Banks today received a 2009 Distinguished Service Citation from The Automotive Hall of Fame at their annual luncheon held in conjunction with the National Auto Dealers Association Convention in New Orleans.

This citation is Hall of Fame’s oldest ongoing recognition and is presented each year to an individual or individuals who’ve had a significant impact on the automotive industry.  Banks is one of only five industry executives accorded this high honor for 2009.

Banks, who this year is celebrating his “first 50 years” in the business, was quite surprised by the selection.  “I sure didn’t see this one coming.  When the letter informing us that I’d been selected hit my desk, I actually had to read it over a couple of times before it sunk in,”  he explained.  “I was humbled by the names of the others who’ve been named for this honor over the years.  It’s a rare day when I’m struck almost speechless,” he added.  ” … But this was surely one of them!”

Automotive Hall of Fame is located in Dearborn, Michigan and is considered by all in the business as the highest place of honor in the International Motor Vehicle Industry.

In accepting, Banks thanked both the Board of Directors of the Automotive Hall of Fame and the Distinguished Service Citation committee for his award.  He also personally thanked his many colleagues who wrote compelling letters of support for his acceptance.  “There are a number of people who put their names and thoughts about me down on paper and sent them to the Hall without me even knowing about it,”  said Banks.  “They are the truest of true friends, they know who they are, how very much I appreciate it, and how much I thank them all for their very kind words.”

Banks award will be on display at the Wally Parks NHRA Motorsports Museum in Pomona as a part of the “Banks Power – The First 50 Years” exhibit which will be there through the end of September ’09.

Read the press release from the Automotive Hall of Fame… 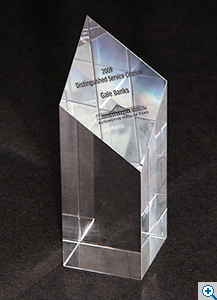