All the latest news on the “rail.”

On March 6th, 2010 the Banks crew tested out the rail’s new “Stroker” 427 cu. in.,
twin-turbo 7.0L Duramax engine at the NHRDA Nationals in Wittmann, Arizona.

“Looking back at Arizona’s Speedworld…”

“We’re ready to make our mark on the dragstrip again…”

“Believe me there’s no one more unhappy about having to make this announcement than me.  I know that we’re going to disappoint a lot of our great fans in the Midwest. Unfortunately, we’re just not going to be race ready for the NHDRA Diesel Nationals at O’Reilly Raceway Park tomorrow”  so said Gale Banks as he reluctantly withdrew his team’s dual entry for the prestigious June 6 all-diesel racing event at Indianapolis.

Pre-race testing has seen many strong runs for the machine, but has also turned up a number of small (but critical) problems which have hampered the vehicle’s progress and delayed its entry into open competition.  “This is the part of professional racing that they refer to as ‘character building’,” said Banks.  “We really wanted to see this new machine run at Indy, it’s one of the classic drag strip venues and we have many strong supporters in that part of the country who had been expecting to see us there.” 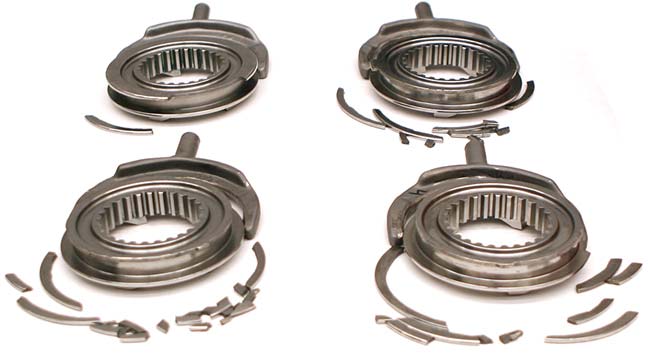 Problematical:  These are the actual transmission sliders the caught the Banks dragster out …
but not before it hooked up on a partial run that netted a 7.17 second time at 190 MPH!

The Banks team had also been set to send the Dragster’s stablemate, the Banks Sidewinder Chevy S-10 to the races at ORP.  That machine already holds title as  the quickest/fastest (7.77 seconds at 180 miles-per-hour!) diesel-powered drag racing pickup truck on the planet.  Driven by top pro Wes Anderson, the short, blunt-nosed Banks machine is a true crowd-pleaser which has set and re-set records in Diesel Pro-Stock just about every time that it makes a run in competition.

Both of these “Sidewinders” race cars use Banks-modified variations of the sturdy 6.6-liter General Motors Duramax V-8 diesel engine. Horsepower and torque figures are both almost surrealistic at well over 1,300 (each!), and both Banks machines are aimed at blowing away records without blowing any discernable engine smoke during race runs. Leaving a cloud of billowing black smoke in the air after a fast pass down the dragstrip is most definitely NOT on the Banks racing agenda.

These techniques and the technology behind them have critical application in many of the new products and processes that Banks Power tests on the tough “battlefield” of professional drag racing.  These are lessons learned where the competition is fierce and the stakes are high.

“There’s plenty of racing season left,”  said Banks.  “We’ll get this one right and be out there running again very soon … I think that our fans will find the results well worth their wait.”

Banks’ Sidewinder Top Diesel Dragster and record-holding Sidewinder S-10 Pro-Stock Pick-Up were both scheduled to take part in the TS Performance Outlaw Drags, set for this Saturday, May 9 at Beech Bend Dragstrip in Bowling Green, Kentucky.  They’ll need to take a bye on that date.

In early testing at Famoso last week the team experienced two transmission failures in the new dragster which effectively took it out of the program for this weekend at Bowling Green. 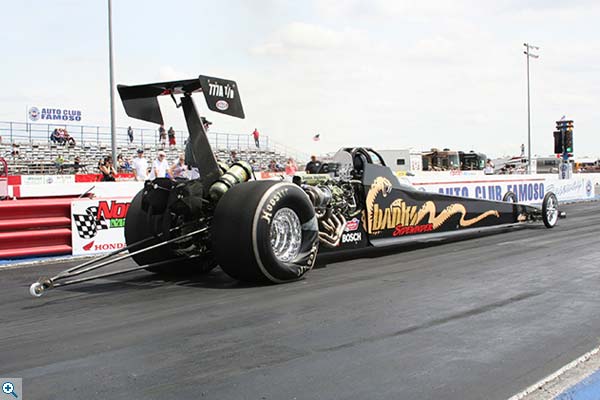 The Bakersfield test session was the first time that the Dragster had ever been on a track and the first few passes showed that the track was having a hard time “holding” the race car (providing grip for the Sidewinder’s massive slicks) so the engine tune was eased-up, “softened” somewhat as was the new multi-adjustable slider clutch.

As the new car break-in runs progressed, the crew got more and more aggressive on the setup and, later in the afternoon, a hard pass was called for.

It was a spectacular run for the first thousand feet, and that’s when Wes Anderson shifted up to 5th gear at just over 160 miles per hour and that’s when the transmission failed under load.  Bang!  Anderson immediately cut the engine and shoved the clutch in and he ended up coasting through the lights somewhere a little south of 180 miles an hour.

A day later the crew had completely rebuilt the transmission overnight and had the machine on the line for the next series of tests.  On the second run of the day, and this time at close to 200 miles per hour, the transmission again failed going into 5th.  Bang!  This time, after quickly shutting down the engine and stepping on the clutch, Anderson pulled one of the Sidewinder’s twin drags chutes for a little added retardation.  He ended up going through the lights at 181.08 miles per hour at 7.17 seconds … With the chute out and in full bloom!

Despite the transmission failure not allowing the car to ever make a full pass, two of the Sidewinder’s critical time-to-distance numbers were taken as strong indicators of the machine’s potential with a 1.097 60-foot, and a 4.588 time to the 1/8-mile.

The Banks-modified Twin turbo Duramax diesel V-8 engine is very different from gasoline-powered engines.  It produces almost equal amounts of torque and horsepower with torque leading the way up the RPM scale.  The sort of brute force that Banks is able to pull out of a Duramax is always guaranteed to put maximum stress on every component in the driveline.  1,300+ horsepower is one thing, but an equal dose of torque is something that has always been both a bane and a boon to Banks.

“Killing transmissions and rear ends in race cars and trucks and stern drives in boats, is the story of my life,”  said Gale Banks.  “But we always find ways to beef them up and get the job done … Stay tuned.” 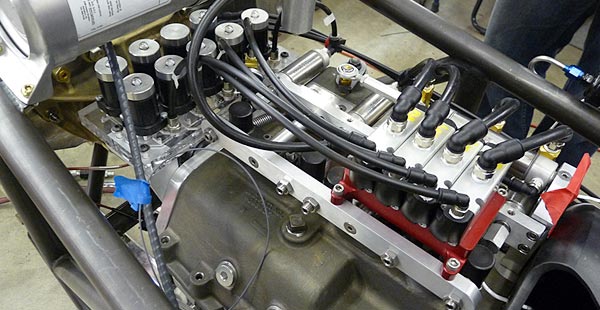 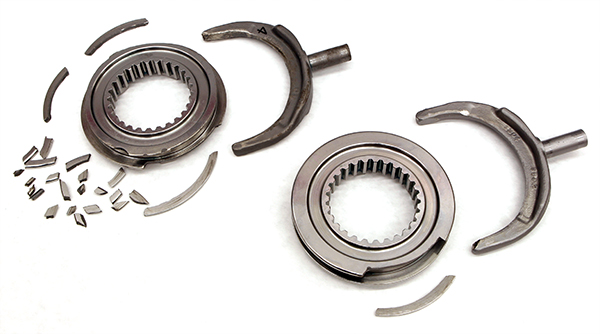 “Check out the test runs at Famoso Raceway”