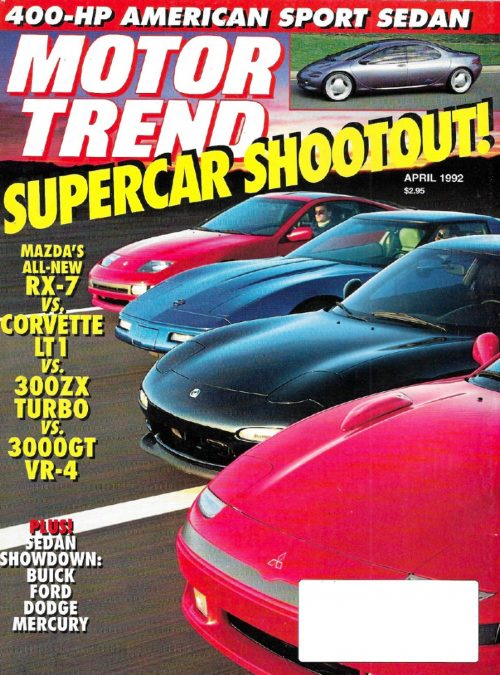 “You can consider this car an advanced Cutlass Supreme,” said Dennis Burke, chief designer of Oldsmobile Exterior #1 Studio. The pretty Anthem can sing for us anytime. It uses a long wheelbase, short overhangs, and low cowl to maximize interior room. The large full-glass roof is darkened electronically by LCD panels. Its engine is a 2.3-liter Quad 4 with a Roots-type supercharger, good for 242 horsepower.

One of the best surprises of last year’s Detroit show turned out to be the IDR Arex, a fanciful take on the future of sports cars. This year’s surprise is the Key Largo, a well-prepared Acura Legend ragtop from Germany’s Design+Technik aftermarket engineering house. It retains full use of the back seat and stores the top stack under a rigid boot.

One of Detroit’s prettiest show cars was in the absolutely smallest display of all—the car and a sign. DuoPower is a California company specializing in custom-made cars. Its Pandora was built from carbon fiber and Kevlar on the chassis and powertrain of a Mercedes-Benz 190E 2.6 and includes Mercedes’ airbag, four-wheel disc brakes, and ABS.

Despite its weak name, the second Chrysler-brand LH sedan is all business. Reports of digital instruments are wrong; they’re analog only. Three equipment levels will include Base, Touring, and Enthusiast (the actual package title). The Enthusiast package includes stiffer suspension settings, more aggressive tires, and uplevel power options as standard equipment.

The production version of the U.S.-spec Lotus Elan showed its mildly revised face In both Los Angeles and Detroit. Changes from the European original Include a slightly longer nose and tail to accommodate energy-absorbing bumpers and airbag sensors, bigger, custom-designed 205/45ZR16 Goodyear GSD tires, and revised suspension tuning. The sole engine for the 800 Elans expected to arrive here in 1991 is a 162-horsepower 1 .6-liter Isuzu-Lotus twin-cam four. The base price is $39,990 Including shipping and prep charges.

This radical sportster is as intriguing as many of the future cars commonly seen at the Tokyo show. Industrial Design Research of Laguna Beach, California, crafted the open-air Arex from the ground up, and while the “coachwork” may be fanciful, the hardware, including a functional race car-quality chassis, is not. Power is derived from a Gale Banks 5.7-liter V-8 with EFI and twin-turbocharging. Output claimed in “sport trim” is 720 horsepower.

Although it had yet to pass final EPA certification by showtime, the Vector W8 turned plenty of heads in Los Angeles. With a base price of $283,750, the latest iteration of Gerry Wiegert’s hyper-tech dream machine has gone to limited production and reportedly will become street legal in the U.S. sometime this spring. A transverse 6-liter 600-horsepower twin-turbo V-8 engine mounted amidships gives the W8 a claimed top speed in excess of 200 mph.

Subaru’s stylish SVX will appear in dealer showrooms this fall. The 140-mph all-wheel-drive replacement for the XT Coupe gets a 230-horsepower all-alloy DOHC 3.3-liter fuel-injected horizontal six matched with a four-speed electronically controlled automatic transmission (a five-speed manual will follow later). Among its standards are ABS and a driver-side airbag, the first Subaru to come with a supplemental restraint.