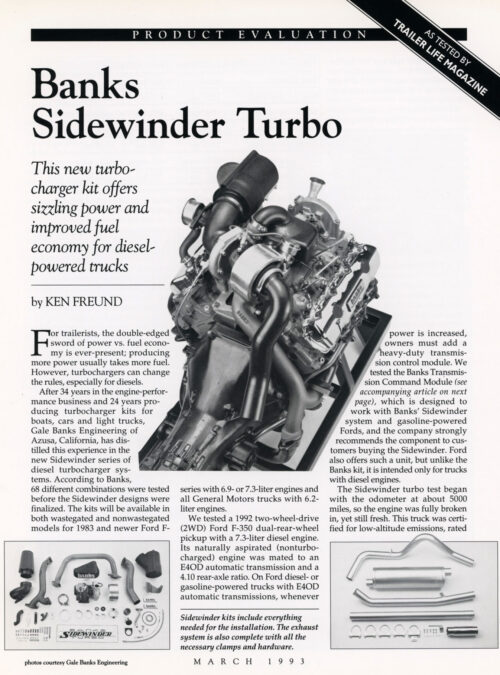 For trailerists, the double-edged sword of power vs. fuel economy is ever-present; producing more power usually takes more fuel. However, turbochargers can change the rules, especially for diesels. After 34 years in the engine-performance business and 24 years producing turbocharger kits for boats, cars, and light trucks, Gale Banks Engineering of Azusa, California, has distilled this experience in the new Sidewinder series of diesel turbocharger systems. According to Banks, 68 different combinations were tested before the Sidewinder designs were finalized. The kits will be available in both wastegated and non-wastegated models for 1983 and newer Ford F-series with 6.9-or 7.3-liter engines and all General Motors trucks with 6.2-liter engines.

We tested a 1992 two-wheel-drive (2WD) Ford F-350 dual-rear-wheel pickup with a 7.3-liter diesel engine. Its naturally aspirated (non-turbocharged) engine was mated to an E4OD automatic transmission and a 4.10 rear-axle ratio. On Ford diesel- or gasoline-powered trucks with E4OD automatic transmissions,  Sidewinder kits include everything needed for the installation. The exhaust system is also complete with all the necessary clamps and hardware. Whenever power is increased, owners must add a heavy-duty transmission control module. We tested the Banks Transmission Command Module (see accompanying article on next page), which is designed to work with Banks’ Sidewinder system and gasoline-powered Fords, and the company strongly recommends the component to customers buying the Sidewinder. Ford also offers such a unit, but unlike the Banks kit, it is intended only for trucks with diesel engines.

What makes the new Banks Sidewinder system different from previous models is the optional wastegate setup. Previously, the turbine size was chosen to reach peak boost near maximum rpm; this strategy produces the best power at the top end but is not necessarily the best at lower rpm levels. By creating a system that employs a faster-acting, smaller-diameter turbine, turbo boost comes in sooner.

This cuts lag time and produces more torque at the bottom end of the rpm range to get the rig rolling. A wastegate is employed to keep the compressor from producing excessive pressure at the top end, thus keeping intake air temperature down. The Sidewinder’s wastegate limits pressure to about 9.5 psi.

According to Banks, during development testing, the Sidewinder-turbocharged Ford produced a peak power rating of 264 hp at 3300 rpm and a peak torque of 503 lb-ft at 1600 rpm, measured at the engine’s flywheel, as manufacturers do. We tested power output at the rear wheels, which is where it counts for the truck owner. Rear-wheel power output is always lower than flywheel output because quite a few horses get lost on the way through the transmission and rear axle.

The Banks Sidewinder kit for the Ford diesel consists of a turbocharger with cast-iron exhaust connections, a custom crossover pipe, a specially designed air-intake plenum, and all brackets, hoses, and hardware necessary for a  complete installation. Also included is Banks Ram-Air intake, which comes with a million-mile Filter Charger reusable air cleaner, at no extra cost. Another nifty standard feature is the exhaust pyrometer gauge, which allows the driver to monitor exhaust gas temperatures. Commonly used on large commercial trucks, this gauge is especially useful to finalize the fuel setting after installing the turbo and to monitor the engine’s operation thereafter.

A different exhaust system is also needed to make the conversion, and it is available from Banks. The new system bolts on via the original hangers, so no welding or modifications are necessary. A custom, 14-gauge crossover pipe bolts to the inlet on the turbocharger manifold and to the stock exhaust manifold on the driver’s side. The forward section of the replacement single-exhaust system is mandrel-bent 14-gauge steel, aluminized for rust protection; the rear portion is 16-gauge tubing. The standard Banks pipes and mufflers, as tested, have a three-inch diameter, which has the ability to flow a lot more gases than the stock two-inch system. An optional “monster” exhaust with three-inch-diameter tubing is also available. Banks told us that the larger-diameter system, which we did not test, is good for about four or five extra horsepower at peak rpm.

Exhaust is routed from the new crossover pipe into the turbocharger and then back into the exhaust system. A braided, aircraft-style, stainless-steel oil line provides oil for lubricating the turbo bearings. A special angled air-filter housing directs air into the turbocharger, and pressurized air is ducted into the engine through a large cast-aluminum plenum that fits onto the intake manifold. According to Banks, a lot of developmental work went into the plenum and the location of the turbo. The angled position, which led to the Sidewinder moniker, allows the gases a straighter shot at the turbine blades.

Mounting the Sidewinder on Ford’s engine is straightforward; no fussing or fabrication is required. All of the necessary bits and pieces come in the kit, and no special tools or procedures are needed. Most installations are done by professionals, but a skilled do-it-yourselfer could tackle the job. Banks advises that an average installation takes about four hours plus road-test time. Banks’ crew will install the turbo and exhaust system for $295.

Once the turbo kit has been installed, the fuel-enrichment setting on the fuel injection pump must be adjusted to comply with the 40 percent smoke-opacity regulation by increasing the fuel-delivery rate but limiting it to the legal maximum smoke level. This apparent paradox is possible because the turbo supplies more air; thus, the fuel-air ratio is effectively “leaned out,” even though slightly more fuel is available at full throttle. The finished installation is very eye-catching and appears to be well designed.

We checked the test truck’s horsepower at the rear wheels with a Clayton 400-hp chassis dynamometer, both in the stock configuration and after the turbo installation. This testing was done at an elevation of 497 feet. Actual readings were corrected to standard temperature, humidity, and barometric pressure, in accordance with the Society of Automotive Engineers (SAE) methods. This method allows results of tests done under different conditions, such as weather, to be standardized for proper comparison.

Corrected peak rear-wheel horsepower before installation of the turbo was 135 at 3250 rpm. Peak turbocharged power, corrected to SAE standards, jumped to 209 at 3000 rpm for a dramatic 61 percent gain at the new ~rpm horsepower peak. Additionally, major gains were made throughout the usable rpm range. This is equally important because most of the time the engine isn’t run at the rpm where peak horsepower occurs.

Our experience shows that turbodiesel engine power output will remain approximately constant up to 7500 feet altitude; stock engines lose close to 30 percent of their power at that elevation. This is especially important to anyone who lives-or intends to drive-at high altitudes because turbocharging will show even greater gains over stock non-turbo engines at higher elevations. According to Banks, power improvements of over 90 percent can be expected when fitting a Sidewinder on a high-altitude calibrated (lower stock horsepower) engine, and on-the-road performance gains will also be dramatic.

Our test truck weighed 6580 pounds with full fuel tanks, plus a driver and passenger. A 6,360-pound trailer was towed behind the Ford, for a total combined weight of 12,940 pounds.

The difference in performance created by the new Banks system was like night and day. Acceleration without the trailer went from leisurely to quick. ”Turbo lag” was barely noticeable; when the driver stabbed the throttle, the engine dug in immediately. No longer did we live in fear of uphill freeway onramps, since the truck could quickly merge with traffic. The improvement in trailer towing was also dramatic, as the following figures show.

A highly accurate fifth-wheel speed-measuring device was used to measure acceleration (refer to the data panel on page 68). When driving solo, 0-60 mph came up in 15.57 seconds stock, compared with 9.54 seconds turbocharged. Zero- to 60-mph runs while towing the trailer improved from 27.30 seconds to 17.24 seconds. When driving solo, 40-to 60-mph runs averaged 7.97 seconds before and 4.74 seconds after the turbo installation. When towing, 40- to 60-mph acceleration went from 13.64 stock to 8.65 seconds turbocharged.

The fifth-wheel also allowed us to record the distance required to accelerate from O to 60 mph and from 40 to 60. These distances are significant when pulling a trailer up an onramp and merging, or when passing on a two-lane road.

The U.S. Department of Transportation Highway Design Manual calls for a given acceleration lane length when merging on a level freeway. That length consists of a distance of 467 feet from the beginning of acceleration to the merging point. An additional 450 feet are required to fully merge. The total acceleration lane length is therefore 917 feet; in that distance, a vehicle must be going 55-60 mph to merge safely.

The 0- to 60-mph merging test took 1,507 feet when pulling the trailer with the stock 7.3-liter engine. With the Sidewinder installed, it took only 951 feet, for a whopping 556-foot reduction. In this situation, additional power means additional safety.

In our 40-60 passing test, the truck with the trailer took 1,014 feet in stock condition and 644 feet with the Sidewinder, an improvement of 370 feet. This translates into passing in less than two-thirds of the distance, greatly reducing risk.

Our towing loop took us up El Cajon pass on Interstate 15 east of Los Angeles, California, for a round-trip total of 109 miles. This truck-killing grade runs uphill out of the San Gabriel Valley toward the Mojave Desert west of Las Vegas, peaking at about six percent gradient, with a summit elevation of 4190 feet.

Fuel economy went from 15.1 to 16.0 mpg, or 6 percent, a nice improvement considering the increased power and the additional speed climbing the grade. We tested with overdrive activated both before and after and found that on many sections of road the turbocharged engine could pull a higher gear than the stock version. According to Banks, company personnel has obtained mileage gains of about 11 percent during product-development testing.

Although the Banks exhaust system is less restrictive, the difference in sound levels between the stock and turbo versions was negligible. This is due to the noise-deadening effect of the turbines and the effectiveness of the Banks muffler. At idle and under light throttle, the turbo tends to block sound waves from the exhaust. Under boost, a slight turbine “whistle,” which is typical of all turbochargers, lets you know it’s working. We never regarded the sound as objectionable. The turbo seems to remove some of the rough low-frequency diesel sounds while adding a little jet-like high-pitched whine-a nice trade-off.

Decibel readings were taken by Banks personnel at five engine speeds between 1600 and 3300 rpm from a distance of 50 feet, before and after. In no case was there more than a one-decibel increase from stock; this amount of difference is not perceivable by most people.

The Banks Sidewinder wastegated turbocharger carries an introductory price of $1995.50; the standard non-wastegated Sidewinder kit is offered for $1795.50. A 3-inch-diameter exhaust system is available for $202.50; the optional 3ó-inch diameter lists for $269.50. All prices exclude shipping charges and sales tax, where applicable. Parts are covered by a two-year warranty with unlimited mileage.

The California Air Resources Board (CARB) currently requires certification of a “snap throttle 40 percent smoke opacity” for diesel engines; the new Sidewinder kits were engineered to meet these regulations. Banks has submitted applications to CARB, which, if approved, will make the system’s emissions legal in all 50 states.

We found the Sidewinder turbo to be well-engineered, attractive, and very effective. For RV owners who want more power from their naturally aspirated diesels (and who doesn’t?), the Sidewinder is a prime ticket to a more exciting ride.