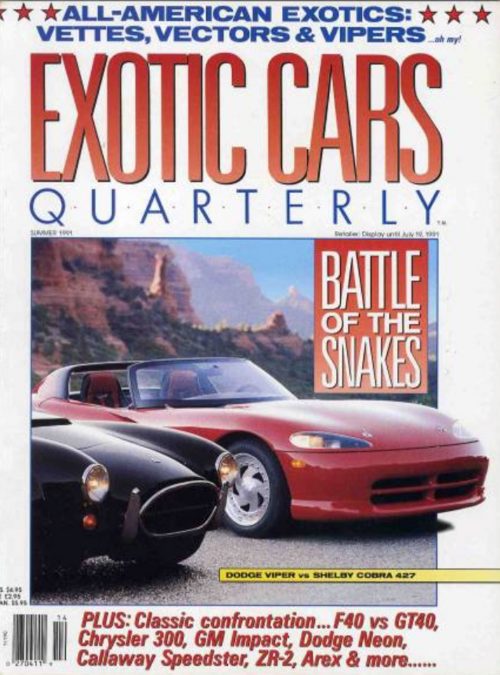 Automotive design studio walls are generally plastered with sketches, a wallpaper of ideas drawings that arc up there for inspiration but rarely taken down and transformed into hardware. Arex is an exception. When the mid-engine Arex (American Roadster Experimental) made its debut at the Detroit show, officials placed it next to the display of future-car drawings from Detroit’s Center for Creative Studies, so the sports car looked like one of those sketches suddenly made real. And real is the appropriate word for the prototype, which is fully functioning and ready for limited production.

The Arex’s creator is David Stollery, the one time GM designer who founded Toyota’s California studio (Calty), and now has his own firm, Industrial Design Research, in Laguna Beach. Incidentally, the IDR studios and shops make Stollery one of those people California’s commuters like to pretend don’t exist: while they grind away in their dull drive to work and back, the designer does his work at home, with a stunning hilltop view of the Pacific Ocean seen through many windows.

Stollery began his American roadster project in spring 1987 but didn’t make his own wallpaper of sketches. After a few preliminary drawings. IDR’s Randy Robinson went to work on the scale model. Because this was to be a complete working car, a chassis mockup was done combining a Lotus-like torque box center back-bone with triangulated tube structures front and back for suspension and drivetrain.

By summer 1987, IDR was transferring the Arex shape to a full size foam core model, setting the interior package and building a plastic tube version of the chassis. Satisfied with their direction, Stollery next fiberglassed over the foam core model to develop the car’s surfaces. By spring 1988. IDR had a full-size painted version of the Arex to show several experts. Everyone liked the basic shape, but the tail was considered “too raw” and had to be further smoothed into the overall design.

Then the Arex went into a short waiting period because it was secondary to the projects IDR does for its clients, companies like General Motors, Subaru, Toyota and Wedgewood Ltd. Various molds had to be made as the design was further developed and finished, but now came the part of the Arex story that makes it so unusual. For a year, starting in spring 1989, Stollery and crew were busy with the detail work, designing and fabricating the necessary flanges, hinges, and so forth that now make the Arex ready for production.

Underneath is a semi-monocoque steel tub with the center backbone and triangulated structures isolated from the epoxy-fiberglass composite body by rubber and urethane bushings. The 20.0-gal. fuel cell fits inside the backbone and behind the seats. The suspension front and rear are from Toyota’s Supra with adaptations to suit the Arex’s needs, such as fabricating new lower rear arms and using push rod-actuated shocks in the back. Brakes and half shafts are also borrowed from the Supra, though the steering rack is a custom piece from Gordon Schroeder.

The chassis design was done by Jae Brown. a Subaru engineer who has considerable experience with Formula Fords and working in the shop: of rally specialist Rod Millen, who was kind enough to provide space for the Arex chassis to be built. Brown backed up his experience with computer time. checking the chassis’ stiffness and safety and providing funds for much of the engineering work. While the frame offers protection for the occupants, 2.5-mph bumpers are not part of the plan and don’t have to be for the limited production of 10 per year that IDR hopes to achieve.

The designer’s final problem was an engine, Stollery explains. “This is an American car, and I feel Chevrolet has that image … the Heartbeat of America. We were unable to get GM motors, but GM did introduce us to Gale Banks. Gale came down to see the car, spent about 10 minutes looking at the photos and the chassis and said, “we’re in.'” What was in was a Banks twin-turbo Chevrolet 5.7-liter 585-bhp V-8. The gearbox for all that power? The same ZF 5-speed first developed and still used for the De Tomaso Pantera.

Given that power and the Arex’s 2600-lb weight, Stollery, Banks, and Brown figure the roadster gets to 60 mph in 3.7 seconds and on to 200 mph. Plans call for a second car to be finished in 1991 to serve as Brown’s engineering prototype. What happens after that depends on the money people.