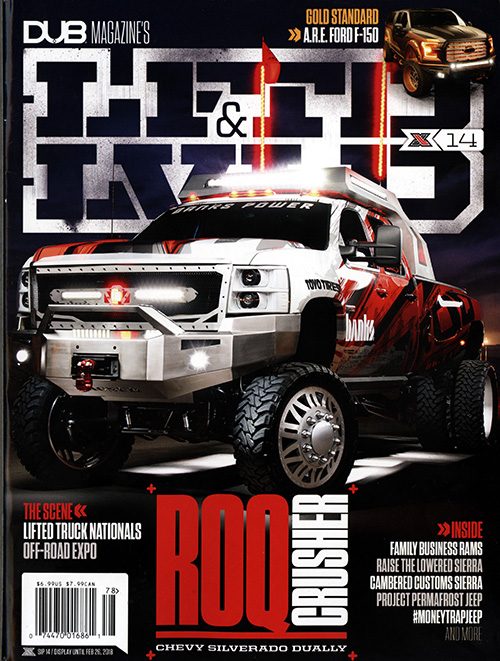 Los Angeles, California, “The City of Angels”, is a place where millions of people come to turn their dreams into reality. If you can imagine it, it can happen in LA. Known to fans as “Lightning,” Jay Tilles no stranger to those dreams turned realities. As a longtime resident of Southern California and a radio personality for KROQ-FM for the past 26 years, he has seen more than his fair share of entertainment and customization. In fact, he himself has been a part of that scene, owning everything from a lowered Mini Cooper to a lifted one-ton dually. The most common form of mobile advertisement for many radio stations is typically your standard Econoline style van. They serve a great purpose, but Jay thought, “Why be ordinary?”

But before Jay got started, he said to himself, “What if I built a crazy truck that could be shown on KROQ’s behalf at events all over L.A. and Orange County?” After a few meetings, emails with attorneys, and a rendering or two, the station agreed and Jay was off and running. It would be the first time the station had ever permitted a privately-owned a vehicle to adorn its logo. But what goes better together than rock ‘n roll and a lifted truck? With nearly three decades in the entertainment industry, Jay knew exactly who he wanted to be a part of the build.

“I bought the truck in 2014 from CARMAX and had it shipped to L.A. from Arizona,” he details, adding that he searched for about a year and couldn’t find any dually to fit his needs in So.Cal   “I had very specific wants. It had to be a pre-owned truck with low mileage and be black or white. At the time, the goal was to buy a truck that would pull my 36 Hallett [powerboat], but as soon as I bought it, as I do with every vehicle, immediately decided to customize it and, of course, bring it to SEMA!”

So the SEMA crunch began around May of 2015, with hours and hours of work ahead of him. The crunch timeline started with the dually spending a few months at Banks Power, followed by the suspension, custom fuel tanks, entertainment, wrap, wheels, tires, brakes, and lastly, the bumpers and roof rack were custom built simultaneously. The build was finished the night before the vehicle was set to roll into the 2015 SEMA Show.

Shortly after the show, he updated just about everything on it. Wheels, Tires, wrap, suspension, roof rack- a complete makeover for the following years SEMA Show. Since then, the truck has been shown at more than 70 events, including concert, festivals, car shows, truck shows, Monster Jam, SuperCross, off-road expos and the list goes on. “Occasionally, we place a DJ in the back of the truck and roll out the CargoGlide, which acts like a stage.”

With so many new mods, it was hard for Jay to pick out his favorites, but he still obliged and listed his faves; “Aside from the incredible work that Gale and his team at Banks Power did to the powertrain, the most notable parts of the truck is the aluminum roof tack and stainless steel from and rear bumpers. Designed by ICI, the Magnum, bumpers were water jet cut and finished welded by Rick Wright at Wright Designs. They’re works of art.”