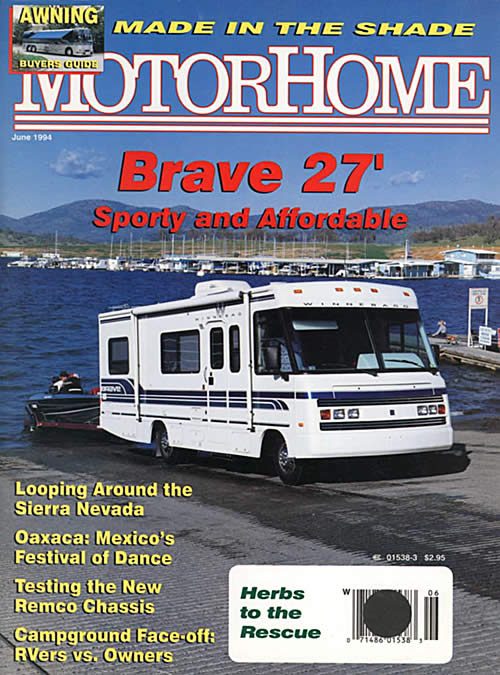 Acceleration = Force/Mass. It’s simple Physics 101, and it is incontrovertible. Unfortunately, many motorhomes have too little of the former and too much of the latter to satisfy their owners.

Changing these variables is a popular pastime with many motorhomers, and increasing the efficiency of the engine is one of the most effective ways to get more “Force.” Internal combustion engines are essentially air pumps, and anything that can be done to improve the airflow through them will likely improve performance.

We’ve addressed the usual advantages of performance exhaust and intake systems before in these pages, but for our newcomers, they bear repeating: faster acceleration, better fuel economy, lower temperatures, less detonation (ping), with no moving parts or loss in reliability. An added benefit on Ford and General Motors chassis is eliminating the trouble-prone stock exhaust manifolds.

Free-flowing intake and exhaust systems allow engines to pump more air, and lower the energy required to pump it by reducing restrictions of the air intake and exhaust gases. They improve cylinder filling and lessen the amount of hot residual gases that remain in the combustion chamber as the new air-fuel charge enters.

Gale Banks Engineering has introduced a new “PowerPack” kit designed for Ford 7.5-liter gasoline engines in a Class A motorhome chassis. It consists of a complete replacement exhaust system from front to back, including tubular exhaust manifolds (headers), mufflers and pipes, plus special fresh-air intake ducting designed to draw unheated air ahead of the radiator and direct it through a low-restriction reusable K&N air-filter element. Cooler air is denser and allows the engine to develop more power with less detonation.

The headers are made of 14-gauge steel tubing with industrial chrome plating. A 2 1/2-inch inlet diameter Y-pipe with a 3-inch outlet connects the two headers to form a single exhaust and leads to the front muffler. A single 3 1/2-inch diameter pipe exits the rear muffler and terminates just forward of the rear wheels on the driver’s side, similar to stock. The front pipes and mufflers are stainless steel for heat resistance; the tailpipe is made of aluminized steel and a chromed tip finishes it off. Wall thickness of all tubing is 16 gauge. The kit also includes all the necessary hardware and heat shields to complete the installation.

We tested the Banks PowerPack on a 34-foot Class A motorhome built on a stock 1993 Ford chassis, powered by a 7.5-liter (460-cid) V-8 gasoline engine. The coach weighed 16,560 pounds as tested, including the driver and passenger. Ford eliminated the catalytic converter on motorhome chassis built after January 1, 1993; converters had been a source of problems in the past. However, the engine still has electronic fuel injection and an oxygen sensor, so it self-adjusts to a change of exhaust and requires no special tuning changes.

Tests included rear-wheel horsepower, 0- to 60-mph standing start acceleration, 40- to 60-mph passing acceleration, a 108.3-mile highway fuel-economy loop and hill-climbing speed. We also monitored exhaust gas temperature and backpressure. The 6 percent hill climb was part of the fuel-economy loop, which was conducted at 60 mph on California’s Interstates 10 and 15, up the famed Cajon Pass to an elevation of 4190 feet. We ran each test first with the stock vehicle as a baseline and then with the Banks PowerPack installed.

Rear-wheel horsepower testing was done on a Clayton 400-hp capacity chassis dynamometer, and all readings were corrected to Society of Automotive Engineers (SAE) standards. The standards consider changes in atmospheric pressure, temperature and humidity, thus allowing readings taken on the same dyno at different times under varied atmospheric conditions to be compared more accurately. All readings were taken with the fan clutch engaged.

It’s important to point out that the factories use ratings derived from engine dynos at the flywheel. Readings of rear-wheel horsepower taken by a chassis dyno are always lower due to drivetrain losses. Also, results taken on different dynos are not directly comparable because of differences in calibration. 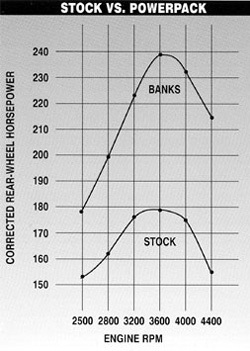 The stock motorhome produced an average peak of 180.7-hp at the wheels. With the PowerPack, we saw a peak of 239.0, for a gain of 58.3 horses (all numbers SAE corrected). That is a substantial 32 percent increase. The peak power also occurred 200 rpm lower, which makes it more driver friendly.

The hill-climb test began by approaching the grade at 60 mph and flooring the accelerator pedal as needed to maintain speed. Stock, we achieved a respectable minimum of 58 mph; however, with the PowerPack, we were able to accelerate to 67 mph, instead of losing speed. This amounts to a 9-mph gain on the steepest gradient used on interstate highways.

Fuel economy also showed a significant improvement from 7.65 mpg stock to 8.57 mpg with the PowerPack, for a 12 percent improvement. The savings provided by gains in fuel economy help offset the initial cost of the system, and over many miles could conceivably pay it off.

Sound level was never a problem. The Banks system has a somewhat deeper, “throatier” sound than stock, but it was never annoying, and there were no irritating resonances. According to Banks, several types and combinations of mufflers were tried during system development, and it took the two mufflers in series to control the noise produced by the Ford big-block engine.

Installing headers and exhaust on a motorhome can be done by an experienced do-it-yourselfer; however, it can also be difficult. This is especially true if any of the old parts are rusted or stuck together, or if any components need to be bent or modified to fit around special coach work or chassis obstructions. Typically, professional installation takes about seven hours; however, this will vary with coach construction and model. Banks has a large number of installing dealers; call or write Banks for the name of the nearest one. Be sure to ask for an estimate first.

Banks also recommends using the company’s TransCommand Module, especially when engine power output is increased above stock. This module works in conjunction with the electronics of the stock transmission to improve shift quality and avoid slippage under high-power shifts. Suggested retail price is $294.00, plus tax, shipping and installation.

The Banks PowerPack kit, as tested, has a suggested retail price of $1875, plus tax, shipping and installation, as applicable. A limited lifetime warranty covers all components. PowerPack kits are available for either carbureted or fuel-injected Ford Class A and Class C motorhome chassis with 7.5-liter engines and General Motors Class A chassis with 7.4-liter engines. Pricing varies with application. Banks reports that all PowerPacks are emissions legal in all 50 states.

The Banks PowerPack performed well in all tests and delivered as promised. It appeared to be well made and well designed, and provided a major gain in performance without any trade-offs. Based on our experience, the PowerPack is a viable way to get better motorhome performance and economy without giving up durability.

May the Force be with you!