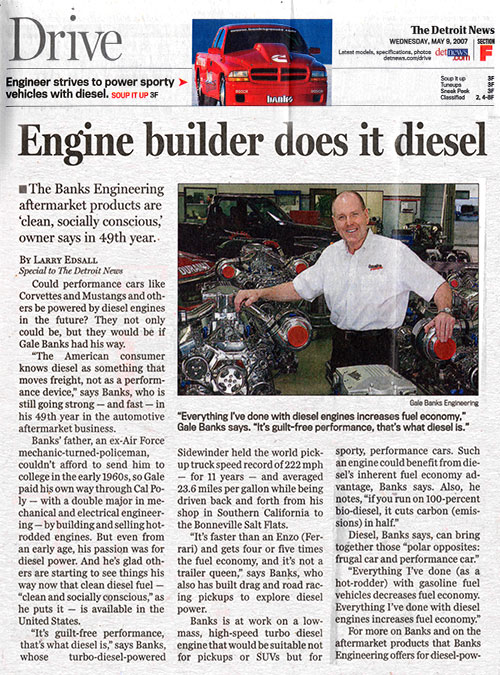 Could performance cars like Corvettes and Mustangs and others be powered by diesel engines in the future? They not only could be, but they would be if Gale Banks had his way.

Could performance cars like Corvettes and Mustangs and others be powered by diesel engines in the future? They not only could be, but they would be if Gale Banks had his way.

“The American consumer knows diesel as something that moves freight, not as a performance device,” says Banks, who is still going strong – and fast – in his 49th year in the automotive aftermarket business.

Banks’ father, an ex-Air Force mechanic-turned-policeman, couldn’t afford to send him to college in the early 1960s, so Gale paid his own way through Cal Poly – with a double major in mechanical and electrical engineering – by building and selling hot-rodded engines. But even from an early age, his passion was for diesel power. And he’s glad others are starting to see things his way now that clean diesel fuel – “clean and socially conscious,” as he puts it – is available in the United States.

“It’s guilt-free performance, that’s what diesel is,” says Banks, whose turbo-diesel-powered Sidewinder set the world pickup truck speed record at 222 mph and averaged 23.6 miles per gallon while being driven back and forth from his shop in Southern California to the Bonneville Salt Flats.

“It’s faster than an Enzo (Ferrari) and gets four or fives times the fuel economy, and it’s not a trailer queen,” says Banks, who also has built drag and road facing pickups to explore diesel power.

Banks is at work on a low-mass, high-speed turbo diesel engine that would be suitable not for pickups or SUVs but for sporty, performance cars. Such and engine could benefit from diesel’s inherent fuel economy advantage, Banks says. Also, he notes, “if you run on 100-percent bio-diesel, it cuts carbon (emissions) in half.”