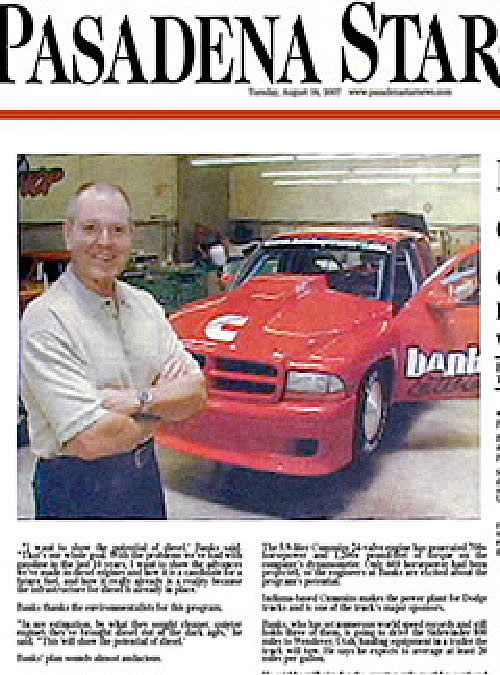 Gale Banks’ goal is to push his diesel-powered Dodge Dakota to speeds up to 210 mph at the World Finals at Bonneville Flats in October.

AZUSA — Gale Banks hopes that in five weeks, he’ll be driving the fastest sport pick-up truck in the world to work daily.

Banks is president of Banks Engineering, an after-market company that specializes in producing more power for diesel engines. His goal is to push his Project Sidewinder, a Dodge Dakota with a diesel-powered engine, to speeds up to 210 mph at the World Finals at Bonneville Flats, Utah Oct. 16-19.

“I want to show the potential of diesel,’ Banks said. “That’s our whole goal. With the problems we’ve had with gasoline in the last 10 years, I want to show the advances we’ve made in diesel engines and how it is a candidate for a future fuel, and how it really already is a reality because the infrastructure for diesel is already in place.’

Banks thanks the environmentalists for this program.

“In my estimation, by what they sought cleaner, quieter engines they’ve brought diesel out of the dark ages,’ he said. “This will show the potential of diesel.’

The 5.9-liter Cummins 24-valve engine has generated 700+ horsepower and 1,200+ pound-feet of torque on the company’s dynamometer. Only 600 horsepower had been projected, so the engineers at Banks are excited about the program’s potential.

Indiana-based Cummins makes the power plant for Dodge trucks and is one of the truck’s major sponsors.

Banks, who has set numerous world speed records and still holds three of them, is going to drive the Sidewinder 800 miles to Wendover, Utah, hauling equipment in a trailer the truck will tow. He says he expects to average at least 20 miles per gallon.

He said he will aim for the quarter-mile world record and also race it on road courses against other trucks in an open-truck series. And, oh yeah, he’ll drive it to his Azusa office daily.

The truck already has set the diesel industry on its ear. The Sidewinder was a cover feature on the industry journal Diesel Progress. European companies have been calling nonstop; pick-ups are virtually nonexistent on that continent.

Hot Rod TV also did a piece on him.

Crew chief Sheldon Tackett has been busy altering the hood to fit the engine and the front air dam that will help aerodynamics for the record run.

“We’re already happy with everything,’ Tackett said. “We haven’t had very many major problems. And if we develop any problems, we’re not going to run this until we can do so properly. The performance we’re seeing here, we think, shows that 210 is viable.’