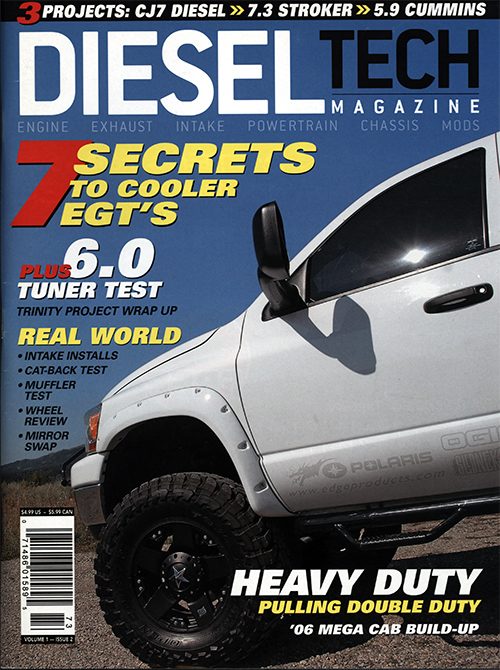 LARGER INTERCOOLERS CAN SERVE AS A RADIATOR TO COOL THE INTAKE AIR TEMPERATURES THAT FEED A TURBO.

According to Peter Treydte, Test Group manager at Banks Power, the purpose of an intercooler is to increase the air density that is delivered to the cylinders of the engine.

“When we consider air density, there are two issues that must be included,” Treydte explains, “temperature and pressure.” Treydte says the higher the pressure and the lower the temperature of the intake air, the greater its density. This is the result of effectively compressing more air molecules into a given amount of volume.

Turbochargers are density increasing devices by venue of the fad that they increase the pressure of the intake air by compressing it,” Treydte explains. “However, one negative side offed of compressing the air is an increase in the air temperature. This results in a potential drop in air density. Treydte says in some cases, an inefficient turbocharger compressor selection when operated at high pressure levels can increase the air temperature enough that the increase in pressure is negated. As a result, improper turbo selection can actually hurt engine performance.

“Even proper turbo selections will increase the air temperature at higher boost levels,” Treydte says. “In these cases, an intercooler can be used to increase the air density by cooling the intake air temperature. Assuming that the intercooler does not dramatically compromise the pressure of the intake air, an improvement in air density will result from a drop in temperature.” Actually, intercoolers are heat exchangers-they use some method to transfer heat from the intake air to another medium. The most common type of intercooler in a street driven turbocharged vehicle is an air-to-air intercooler. “This is a device that might look very much like the coolant radiator in the vehicle and is usually mounted just behind the grill, Treydte says.

Treydte explains that intake air is duded from the outlet of the turbocharger into one side of the intercooler. At high boost levels, the temperature of this air can be high, sometimes exceeding 500 degrees F. The hot air is then routed through a stack of tubes with internal fins. Heat is transferred from the air to the fins and then to the outside of the metal tubes. As outside ambient air flows over the face of the intercooler (either as a result of the motion of the vehicle or assisted by a fan), the heat is transferred out of the tubes, through external fins and into the ambient air.

“The result is cooler air exiting the Intercooler before it is delivered to the cylinders of the engine, Treydte explains. The intercooler used in this process is commonly referred to as an air-to-air heat exchanger. An air-to-liquid heat exchanger can be more effective than an air-to-air design, but is usually limited to marine or racing applications where an abundance of a cooling liquid is present, he says. “The design of the intercooler must not only consider the benefits of cooling the intake air, but pressure should not be dramatically compromised while the air is traveling through the unit,” Treydte explains. “If the intercooler is too restrictive, it may cool the intake air dramatically, but would sacrifice air density by causing too much pressure loss, resulting in a poor efficiency or possibly even a reduction in overall air density. Good intercooler design relies on an approach that optimizes air density by achieving the maximum temperature reduction with a minimum pressure Joss.”

According to Treydte, in the diesel pickup truck aftermarket, the best intercoolers achieve better density recovery than the factory designs by optimizing the size of the intercooler core and streamlining the flow path created by the boost tubes and the end tank design. The Banks Techni-Cooler intercooler achieves the maximum air density by replacing the factory intercooler with an optimized design without the requirements of vehicle modification. The Techni-Cooler installs easily into the factory mounting locations. “Once cooler air is introduced to the cylinder, the result is either a lower exhaust gas temperature when the same amount of fuel is delivered or an increase in power at the same EGT as a result of the ability to add more fuel, he says. For more information go to www.bankspower.com.