Jarod Moray loves his first-gen Dodge Challenger (’06 to ’10) and is keeping the lamp lit for the older models in a sea of newer ones. With every model refresh the aftermarket turns its attention and efforts to the latest models, but freshening up older cars is in his blood. Jarod grew up going to street rod shows with his dad, and avid customizer himself. Most of their family vacations were centered around going to national car shows, driving to these events cross country in a ’48 Chevy pickup. The Moray patriarch would stuff the family of four into the truck’s chopped topped cab with suicide doors and head out for the open road.

The Challenger is the first complete car build between father and son from start to finish. Armed with a modified front bumper, Widebody kit, a Hellcat hood and rear end, cast wheels from a truck, and many more upgrades. The two worked down to the wire to get the car ready for last year’s SEMA Show. “The SEMA-crunch is a real thing,” remembers Jarod, “We were painting it till the last second that Thursday!

The most recent addition to his Challenger was the addition of two iDash DataMonster digital gauges in a custom painted A-pillar mount. Jarod says that they run flawlessly, match his interior colors, and give him the info that he can’t get from any other dash. One of the things he loves about them is that he can see them from outside of the car at night.

Future modifications will include a 6.4-liter and a manual transmission, upgraded brakes, and suspension tweaks. Being the son of a hot rod customizer, Jarod’s Challenger is an artist’s pallet waiting for more. We’re looking forward to hearing about that engine swap when you do it, Jarod! 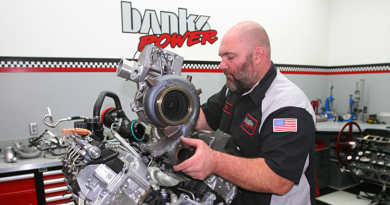 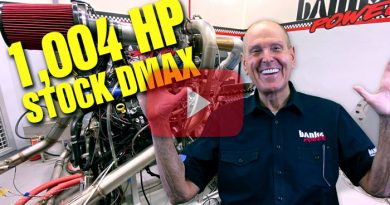