The same techniques that Banks uses to make power also improve fuel economy when you don’t have your foot in it.

A number of the articles presented here in “Banks Talks Tech” deal with the reasons why improving airflow through gasoline and diesel engines enhances power output without hurting reliability. What these airflow improvements really do is improve engine efficiency. And yes, by adding additional fuel to match the additional airflow, substantial power gains can also be achieved. However, after you’ve increased airflow, what happens during normal driving when you don’t need increased power?

It is helpful to visualize where the energy goes from the fuel that is consumed by a typical gas or diesel engine. The accompanying diagram is a good indication of where the heat energy of the fuel goes (for additional information, see “How Banks Power Works”). 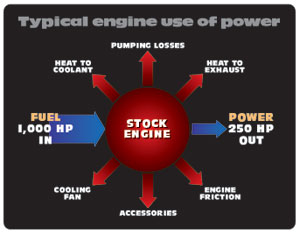 Some people think that once airflow is increased, additional fuel must be added at all times, and that would hurt fuel mileage. This is not the case during normal driving. Increasing airflow means an engine doesn’t have to work as hard to overcome pumping losses. In other words, power that was previously consumed by pumping losses will be available to do work after airflow enhancements have been made. Or, looking at this from the economy standpoint, the same amount of work can now be done while consuming less power (fuel). So in effect, what really happens is that during normal driving, fuel consumption required to achieve equal acceleration or cruising speeds will be less than before the flow enhancements were made.

Let’s look at this for both gasoline and diesel engines.

Gasoline engines differ from diesels in that fuel is mixed proportionately to total airflow (or air mass) through the engine. Because gasoline engines are “air throttled”, power output is then directly related to the total airflow through the engine at any given time. This means that after airflow enhancements have been made and pumping losses have been decreased, a gasoline engine will be able to make the same power at a lesser air throttle opening. This subject of pumping losses for gasoline and diesel engines is described in detail in “Understanding Today’s Diesel”. When the throttle doesn’t have to be opened as far, less air mass is ingested, and that means a proportionately smaller amount of fuel is used too.

The air throttle in a gasoline engine will create a pumping restriction for the intake cycle of the engine whenever the throttle is partially closed. Consequently, under partial throttle conditions, the majority of pumping efficiency gains for gasoline engines come from exhaust flow improvements. Things in the intake system, such as air cleaner capacity and cool air induction, help most at wide open throttle, or nearly wide open throttle. An unimpeded exhaust path helps at all throttle openings.

Diesel engines, by comparison, have no air throttle. A turbo-diesel is free to intake as much air as it’s intake conduits and turbocharger can supply for the load on the engine. A diesel is “fuel throttled”, meaning its power output is regulated by how much fuel is injected. Therefore, all flow improvements in both the total intake and exhaust systems improve efficiency. Just as with gasoline engines, if pumping losses are reduced with flow enhancements, extra power is available to do work without extra fuel consumption.

Because it is improved airflow that increases engine efficiency, it should be noted that power “chips” that simply increase fuel delivery do nothing to improve fuel economy. The same can be said for bigger fuel injectors. Both power chips and bigger injectors simply add fuel to make power. They do nothing to reduce pumping losses or improve the efficiency of an engine. This is just one more area where the Banks approach of “first air, then fuel” adds overall operating value to a vehicle.

There are techniques for maximizing fuel economy by monitoring gauges. If a gasoline engine vehicle is fitted with a manifold vacuum gauge, driving to keep the manifold vacuum as high as possible will minimize fuel consumption. Similarly, if a diesel-powered vehicle is fitted with a pyrometer to measure exhaust gas temperature (EGT), fuel consumption can be minimized by driving to keep the EGT as low as possible. This may require an adjustment in driving style to achieve fuel mileage improvements.

Of course, having extra power for faster acceleration and higher cruising speeds is a lot of fun. We think of it as the “Banks Smile”! But remember, it takes fuel along with air to make power, so enjoy the Banks power when you need it, and enjoy the extra miles per tank of fuel during everyday driving.