Other than big-rig drivers, Americans haven’t worked up much affection for the engine that Rudolf Diesel invented in 1897. Read on to see why that’s going to change.

Other than big-rig drivers, Americans haven’t worked up much affection for the engines without spark plugs that Rudolf Diesel invented in 1897. Except for a brief burst of popularity during the fuel crisis in the early ’80s, when gasoline prices suddenly doubled to about $1.30 a gallon, we’ve been indifferent to the diesel’s ability to squeeze about 30-percent more mileage from a gallon of fuel over a gasoline engine. When fuel is cheap, Americans have had little use for the diesel’s traditionally rougher and noisier operation, its smoky exhaust, sluggish cold starts, and smelly, messy fuel.

Now let’s jump to the end of the article… Not only do modern turbo-diesels work remarkably well in heavy vehicles such as SUVs and pickups, but they also have amazing tuning potential. Gale Banks, who made his name applying his turbocharging expertise to gasoline V-8s, has focused his energies on diesels over the past decade. Last October, a Dodge Dakota he built, powered by a heavily modified Cummins V-6 diesel, ran a two-way average of 217.314 mph at Bonneville, setting a speed record for pickups. With 52 psi of boost pressure, the 5.9-liter diesel was developing 735 horsepower and 1300 pound-feet of torque.

I can imagine worse things than an automotive future based on such engines. 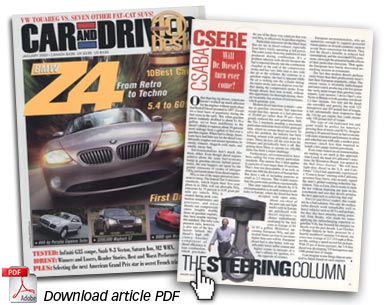