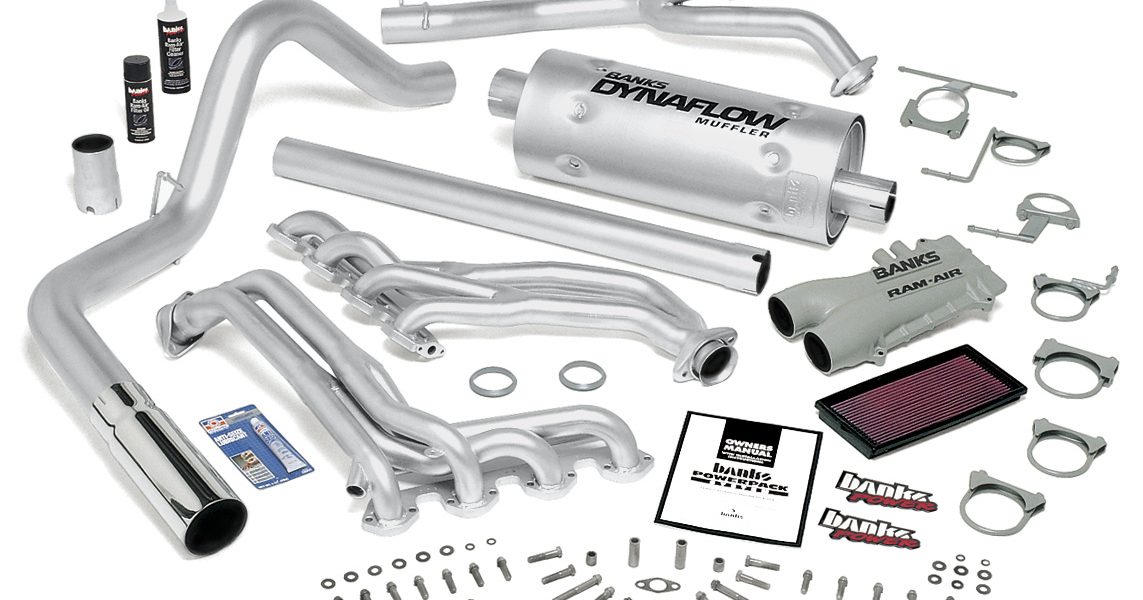 When you teach a pickup how to take a deep breath, magical things begin to happen.

Making a tow vehicle perform better really isn’t all that complicated. In fact, it can be downright simple. Just ask Gale Banks, a towing expert who runs an aftermarket performance engineering shop in Azusa, California. When Field & Stream asked him whether he could improve the towing performance of a Ford F-250 pickup equipped with the big-block 460 cubic-inch V8 engine, Banks, who has nearly forty years of performance and racing experience under his belt, said “No problem.” In fact, he claimed his Stage III PowerPack® System would not only boost the engine’s horsepower and torque ratings, but save fuel as well.

This seemed to be the engineering equivalent of turning lead into gold, so we set up a towing test to California’s Castaic Lake to see if the modifications Banks proposed would really make a difference. As you’ll soon learn, what Banks did to our pickup was surprisingly simple; more important, his lessons can be applied to any 4×4 that must tow heavy loads.

To talk towing with Banks—a lean, intense engineer with a close-cropped haircut that has G.I. written all over it—is to take an advanced seminar in efficient power production. He is a scavenger extraordinaire; his eyes light up when he talks about his mission to find an engine’s hidden power. But he has other objectives as well—he also wants to improve the fuel economy and the life of the engine.

How does he do all that? In a nutshell, his company designs, builds, and installs equipment that allows an engine to breathe better. And when an engine breathes more efficiently, magic happens: it produces more power, consumes less fuel, and runs cooler. And that means better overall performance and longer life.

“What we’re trying to do,” Banks tells me, “is liberate horsepower the engine’s already producing. Engines use horsepower to run themselves. It takes power to suck the air in, and it takes power for the piston to shove the exhaust past the valve. That power is called a pumping loss.”

If you can make it easier for the engine to breathe in and expel that air, you can reduce this pumping loss. Banks begins the process by “ramming the air in.” His Ram Air kit improves the intake ducting, the air-cleaner element, and the air-cleaner housing to make for more efficient air flow. (Doing just these three things increased the power output by 21 horsepower.) “You want to cool, high-pressure air,” Banks says. “That done, you can make higher horsepower or you can throttle back and make greater fuel economy.”

But there’s another aspect as well. By having cooler air enter the engine and reducing exhaust back pressure (more on that later), the pistons, valves, and combustion chamber—as well as the cooling and lubrication systems—run cooler. And that gives the engine longer life.

“So you start to see how improving the air-pumping ability of the engine has beneficial side effects,” he says.

We’re headed for the Grapevine, a murderous stretch of steep winding highway south of Castaic Lake. It’s a great place to test a 4×4’s towing performance. A common experience on such stretches is an engine that lags and an automatic transmission that restlessly shifts back and forth. But with this F-250, it’s smooth sailing all the way. Even on the steepest section, the truck cruises effortlessly at 65 mph. The transmission downshifts smoothly, and then holds rock steady. The tachometer shows 2,000 rpm; the engine is quietly humming along.

Banks has been waiting for this. He smiles broadly and says, “Feels pretty good, doesn’t it?”

All I can do is nod.

“The Ford E4OD automatic transmission is designed to have a nice boulevard shift—more carlike than earlier truck transmissions. But the transmission tends to slip too much under load, and that can compromise its life and durability. So we developed what I call the TransCommand electronic kit. Anybody who hauls heavy loads can use one of these critters. It stops the excessive slip by sensing the load [via throttle position, rpm changes, and gear position]. Then it increases the pressure to the clutch packs in the gear box on those heavy-duty shifts. The amount of slip is always proportioned properly, so you never have a harsh shift. And, you still retain the good shift—by that I mean the boulevard shift—under normal street driving.”

“Well, there’s plenty of power for this hill. The engine is hardly turning. And you’ve licked the gear-hunting problem.”

“Now, that’s a function of our exhaust system,” he says.

Using the exhaust system to increase the torque output of the engine helps keep the transmission from what he calls “a shift-happy situation where the transmission backshifts and upshifts constantly. The truck will stay in the higher gear, which slows the engine down, increases fuel economy, and decreases wear. And the gain in fuel economy is substantial—in many cases as much as 1 mile per gallon. That’s a lot when you consider a big tow vehicle under load is only delivering 5 to 7 miles per gallon.”

To tune the exhaust, Banks took the same tuning formulas he uses on a 10,000-rpm racing engine and applied them to the most efficient torque range of a work engine (1,600 to 2,400 rpm). His system also allows the engine to run freely up to its shift point, so that when you’re accelerating on an on-ramp, the engine isn’t straining.

“It revs freely; there’s no dead spot—what I call the cotton candy wall,” Banks says. “The engine just marches to the shift point.”

The entire exhaust system is stainless steel. Why? Because the exhaust temperatures in these engines approaches 1,700 degrees F. “That’s darn hot,” he says “and only stainless can handle the heat and go the distance.”

Banks’ TorqueTube exhaust manifolds feed the exhaust gas through very low restriction mufflers to a “monster” 3 1/2-inch tailpipe. The idea is to get that exhaust out fast; in the process, back pressure is virtually eliminated. Doing so not only helps scavenge horsepower, but helps drop exhaust temperatures nearly 200 degrees. (In fact, when the engine is in the prime torque range, the system is literally sucking the exhaust out of the cylinders.)

As you can see by now, Banks works on several fronts simultaneously. In raw numbers, his modifications wring an additional—and much appreciated—70 horsepower and 90 foot-pounds of torque out the engine in our F-250. But we also saw an improvement in driveability, engine durability, and fuel economy. As the wizard says, “Nothing wrong with that.”