It’s an exciting time to be involved in high performance diesel.

It’s an exciting time to be involved in high-performance diesel. For the past few decades, I was virtually alone in my quest to build high-performance diesels. Now that turbodiesel-powered trucks are selling like hotcakes, the market is flooded with companies selling diesel performance products. I believe competition is a good thing; it weeds out the bad from the good. The bottom line is, the consumer wins.

Diesel engines are light-years ahead of what they were just 20 years ago. Diesels without turbochargers were pretty lackluster-to put it politely. The mating of the turbocharger to the diesel engine has effectively brought diesels back from obscurity. Since diesels have no octane restrictions, they can handle enormous amounts of turbocharger boost. This is what makes them so much fun to hot rod.

Amazingly, the biggest improvements in diesel technology have arrived in only the past five years or so. Electronic engine management with fuel injection control is, by far, the single most important advancement in diesel engines. The computer-controlled multiple sprays of fuel at different times during the compression and power strokes of the engine have not only quieted diesel engines but have reduced smoke (soot), substantially. Without electronics, this could never have happened.

General Motors, Ford, and Dodge have also realized the importance of charge air-cooling in the past few years. The Big Three now install air-to-air intercoolers on their turbodiesel-powered trucks to bring cool, dense air to the intake charge. The cooler, denser intake air contains more oxygen, which allows the combustion of more fuel. 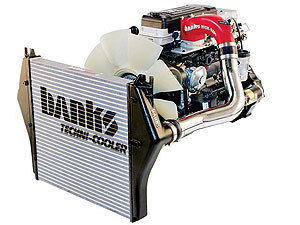 How do you add power to diesels? Diesel engines throttle on fuel, which is unlike gasoline engines that throttle on air. With diesels, the richer the mixture (more fuel), the greater the power. A diesel’s power is ultimately only limited by exhaust gas temperatures and smoke. Excess EGT and smoke may be acceptable for short periods of time, but beyond that, they kill the engine. And that’s no smoke.

Most people believe all you need to do is plug in a diesel computer tuner and that’s it. Well, that’s not it. The informed solution is the correct combination of fuel flow and airflow. As mentioned, the factories quickly recognized the need to increase airflow and density. Proper increases of additional boost, improved air ducting, and greater charge air-cooling are essential when adding additional fuel flow with a diesel computer tuner.

In short, if you don’t deal with airflow in a serious manner—I’m talking more than with a larger exhaust and a low-restriction air filter element—then adding serious amounts of fuel without air is nothing more than putting your engine on kill—not to mention the fact that you’re leaving stunning amounts of horsepower by the side of the road in the form of black smoke and soot. 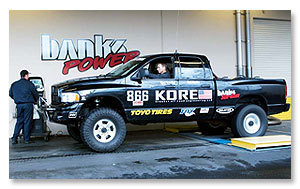 Turbodiesels are the performance option for trucks. I predict the same for cars in the near future. A new generation of performance turbodiesel engines is being engineered right now for trucks (and cars) in Detroit as you read this. Some will even be diesel-electric hybrids. All will have a tremendous untapped reserve that can be hot-rodded.

Racing turbodiesel-powered vehicles is the final frontier. You can get out there and really have fun and be on the leading edge of technology, because the turbodiesel is the engine of the future. Here now.

I hope my column shines some light on how to correctly hot-rod turbodiesel engines. Next time, I’ll get into more specifics on turbodiesel performance and take a deeper look into the future of diesel engine development.