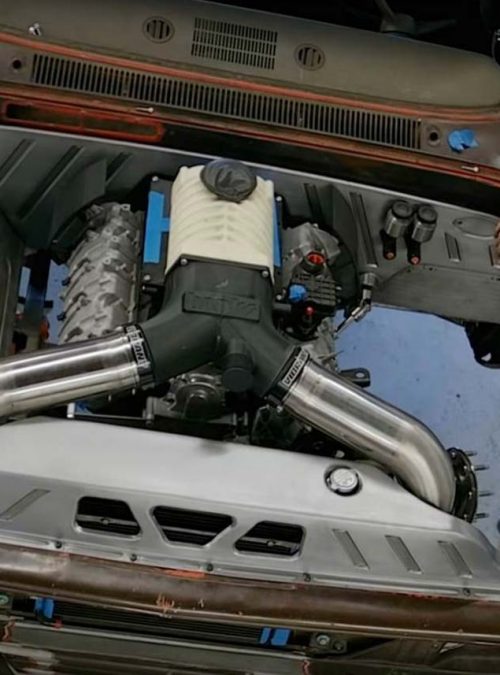 By adding nitrous to the mix right off the bat, Banks has officially laid to rest any notion that its ’66 C20 LokJaw project might be tamable. Now, not only will the Banks-tweaked, state-of-the-art, high-pressure common-rail L5P Duramax diesel be force-fed boost courtesy of the latest Whipple supercharger on the market, but it will have the added benefit that comes from a solid blast of N2O. However, it’s not ready yet. In fact, there’s still plenty to do before the truck everyone’s been watching since January debuts in the Amsoil booth at SEMA.

Below, we’ll touch on the intricate details of the nitrous system, the key elements involved in integrating the air-to-water intercooler and even go back into the shop to fab up the tubes for the cold air intake. Stay tuned for news on Banks’ supercharged, nitrous-huffing Duramax in the weeks ahead. Thousands of SEMA attendees and thousands more watching at home can’t wait to see LokJaw’s public unveiling. No more renderings, no more CAD drawings, no more waiting. Trust us, Amsoil’s exhibit in Central Hall will be a very busy place at SEMA this year.

It’s not panic mode at Banks HQ yet, but the rush is definitely on to get LokJaw ready for SEMA. A lot of the work left to do revolves around the L5P Duramax and its induction needs. Here’s a look at Prototype Engineer, Erik Reider’s handiwork. Erik fabricated the pieces required to build the dual air intake tubes that will feed oxygen into the Whipple supercharger and promptly tacked each section into place. They will eventually be welded up by Empire Fabrication’s Sean Ramage, who was waiting on the intake tubes in order to finalize the cut-out in LokJaw’s hood.

Over in Ventura County, Sean Ramage was busy working on the truck’s powertrain integration at Empire Fabrication. In addition to including a kick-back pocket in the new firewall plate to accommodate the air-to-water intercooler fittings, Sean worked his mastery on the transmission tunnel. Notice it’s a two-piece tunnel here. It will be welded into a one-piece unit later. If the transmission tunnel looks big, it should. If you recall, the guys at Banks decided to keep an Allison 1000 behind the L5P Duramax—a 350-pound six-speed that’s the largest in the pickup truck segment.

Back in Azusa, Gale Banks and Matt Gamble, Manager of the Turn-Key Program, took a look at several designs in CAD and kicked around a few ideas. The first suggestion revolved around sealing the intake manifold to the cylinder heads. Not a fan of RTV—primarily due to the fact that once it spreads out (especially internally) it dries, hangs and can break off and be ingested by the engine—Gale suggested the possibility of using an O-ring seal. In the end, both agreed on a squeeze gap in RTV over O-rings, so long as the RTV can be applied accurately.

Now For The Fun Part…

Nitrous oxide will be employed from the get-go and the guys at Banks plan to start with a two-stage system. They’re also working with Mike Thermos—founder of NOS and the Godfather of nitrous as far as Gale Banks is concerned—on nitrous nozzle design, production, and support. As you can see here, nitrous nozzles will protrude into the intake manifold. However, they will eventually be made shorter and be clocked in a way that will offer a uniform mix of nitrous, which begins in the upper cavity of the manifold.

This is how the nitrous nozzles will pass through (at an angle) the upper portion of the intake manifold as well as the heat exchanger flange. For those that don’t recall, the heat exchanger is part of the compact air-to-water intercooler arrangement that’s also present on top of the engine. The upper portion of the intake manifold will have the boss, the threading and the driver-side rear nozzle is depicted here, penetrating into the manifold. Clocking the nitrous nozzles for maximum performance gains will be the tricky part (as clocking pipe thread always is).

What sometimes gets lost in all the glamor of a blower, nitrous and a one-of-a-kind intercooler arrangement is the fact that plenty of strength has to exist in these components, too. Case in point, notice the styling ribs in the upper intake manifold (at the rear of the supercharger and below the Banks logo). Their purpose goes beyond simply spicing up the design. With only a 0.200-inch wall thickness being present in the upper intake manifold, the ribs were added for stiffness. Also notice the large, 90-degree fittings at the back of the engine…

The radius’d, 90-degree fittings present at the back of the engine and located in the back of the air-to-water intercooler core will be part of the secondary cooling system. Banks recessed the fittings as much as possible to avoid firewall clearance issues but made sure not to skimp on their size. The inner diameter of the fittings measures 15.5mm (that’s just shy of 5/8-inch), so plenty of water is going to pass through them.

So, What’s The HP Goal, Again?

At the outset of the LokJaw project, Banks divulged that anything from 700 hp to 1,200 hp would be on the table. With it nearing completion, and thanks to the recent addition of nitrous, expect them to pursue four-digit horsepower—and then some. With the 3.8L Gen-5 Whipple supercharger producing boost, nitrous adding even more and who knows how much fuel being mixed in thanks to the L5P Duramax’s potent high-pressure common rail system, LokJaw is going to be a handful to operate on the street.