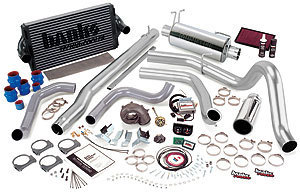 Gale Banks has become a horsepower legend over the years, developing and manufacturing high-performance engine components and turbocharging systems for racing, street, and off-road applications. Gale Banks Engineering prides itself on designing high-quality parts and components to increase engine power, performance, and reliability. Today’s 4×4 truck market is one of Banks’ major divisions, and Ford’s Power Stroke diesel is a natural for Banks’ upgrades.

Banks Engineering is one of the true leaders in the industry of engine airflow management. The secret is to be able to remove the airflow restrictions in the intake and exhaust systems. The team at Banks can safely increase the fuel delivery, creating more power and torque. The Banks OttoMind is custom calibrated to each vehicle application to maintain the optimal air/fuel ratio and safe exhaust gas temperatures (EGT). By improving the engine’s airflow, Banks develops better mileage and diesel durability. Working with product manager Jeff White and engineering manager Peter Treydte enabled Off-Road magazine to get a clear perspective of the product and its designed functions and features.

To increase the torque and the horsepower of a ’99 Ford F-350 Super Duty Power Stroke 7.3L Turbo Diesel, we followed Zane Messenger as he installed a Banks PowerPack® system.

The PowerPack includes a Banks Ram-Air free-breathing lifetime filter to replace the stock paper air filter element. The Banks OttoMind engine calibration module alters the shape of the fuel curve to match the improved airflow and to optimize the power at the proper shift points. For the exhaust, Banks replaces the restrictive factory exhaust plumbing for a stainless, free-flowing Monster T.O.P. (turbine outlet pipe), a Dynaflow muffler and a stainless 3-1/2-inch constant-diameter Monster tailpipe with a girthy 4-inch polished tip.

After bolting all the goodies on, the mighty Ford 7.3L Power Stroke showed impressive power gains, especially in bottom-end torque. Here’s what it takes to really get smokin’ diesel performance. OR