I love Gale Banks semiannual picnic, better known as the Gearhead Bash. I always tell my wife it’s the social event of the internal combustion season. In Hollywood, there might be bigger events, like the Emmys or the Oscars, but there are none as fun as this-especially for gearheads. For those of you don’t recognize the name, Gale Banks is a longtime hot rodder and land speed racer who owns Gale Banks Engineering, a California-based company that specializes in components to make cars and trucks go faster. He’s got a beautiful 12-acre spread in Bradbury, Calif., at the foot of the San Gabriel Mountains, and on the big day it’s packed wall-to-wall with motorcycles, race cars, vintage vehicles, trucks, customs, and hot rods. It’s a chance to get interested in cars you’re not even interested in, or didn’t think you were interested in.

The theme is simple: If it rolls, explodes and makes noise, it’s at Banks’ bash. There was a guy there this year with a purple hot-rod belly tank that looked like an old dry-lakes racer. No fenders, dinky little lights, powered by an old Ford flathead and, get this it’s street legal. There was an innocent looking Corvair-with a Yenko Stage IV-spec, 230 hp engine. Take that Ralph Nader.

And everyone is there-Hollywood car guys like Tim Allen, racers like Rodger Ward and Danny Sullivan, and old hot rodders like Alex Xydias, Jack Stewart and Ed Iskenderian. It’s a great chance for the older guys to pass on knowledge to the younger guys. It’s like a council of elders. Plus, you meet people from all walks of life.

A particularly cool thing about Banks’ set up is that you see old versions of guys you saw in Hot Rod Magazine 30 years ago. You’re walking along and go, “That guy kinda looks like an old so-and-so. No,wait a minute, that is so-and-so. It’s him”. That’s kind of funny, too. It’s great to see what are literally old men exhibiting such great enthusiasm. I mean, these guys are in their 70s and 80s.

Y’know, usually when you talk to old men, you have this kind of conversation: “How are you, sir? Good? Goood.” You have these generic conversations. But when you talk to the old guys at Banks’ party, the years drop away, and you are talking to another hot rodder, who just happens to be an old guy. That’s what’s really exciting. They see your car and ask, “How fast will it go?” Or they immediately start talking about how to make it go even faster. When’s the last time you talked to a 70-year-old juvenile delinquent?

Banks says he started doing this party every other year so there would be a non-commercial event where a variety of enthusiasts could come and see one another’s stuff. He also wanted a place where a lot of older guys could gather and see what’s going on today, “Now I’m one of the old guys,” he says. Give me a break. He’s only 60. All right, 60 going on 19.

Among my favorite things this year were these little stationary engines brought by a guy named Larry Evans, his brother Ken and a Los Angels County sheriff named Mike Jones. They own a bunch of single-cylinder, hit and miss engines and they had a great display set up. These little engines have big flywheels attached, and they can run pumps and generators. They go pop, pop, pop and can just sit there, firing a few times a minute, for hours on end. They’re essentially maintenance-free, once they get running, Single-cylinder engines like these essentially go back to the dawn of the Automotive Age. Some of them are 100 years old. They’re immensely overbuilt, so they can run for eons. They’re simple, reliable and they don’t wear out. One of them drives a water pump that uses water pressure to pump water up a hill. There were even a few Stirling cycle engines. If you ever want to explain to a friend how an engine works, this is the easiest way to do it.

I just got a couple of these engines myself. The parts are so big, they’re not very hard to work on. And there’s immense satisfaction in taking them apart, cleaning them, and putting them back together and getting them to work. You feel like you have overhauled an entire engine in one afternoon.

There were a bunch of brass cars again this year. My favorite was the Jackson. I think it was a 1911 Model 51 touring car with an overhead cam engine, exposed valvetrain and hemispherical combustion chambers. Y’know, there really not much on new cars that hasn’t been done already, except for electronics. The Jacksons were made in Jackson, Mich., from 1903 to 1923, and they’re a perfect example of something that really was ahead of its time, something people appreciated but didn’t really want. I mean, when you don’t even know what an engine is-overhead-cam or flathead-who cares? It doesn’t really matter. The Jackson slogan was, “No hill too steep, no sand too deep”.

I saw a Thomas Flyer and a Pope Hartford. A Thomas won the epic New York to Paris ‘round-the-world race in 1908. It got a lot of publicity at the time and it was Thomas’s big claim to fame. That race would be tough even today. Despite that success, the Thomas, which was built in Buffalo, N.Y., was gone by 1918. The Pope was built in Hartford, Conn., from 1904 to 1914. Founder Col. Albert A. Pope built his well-engineered cars in a number of cities, including Toledo, Ohio, and Hyde Park, Mass. And of course, there was a Model T Ford, the car that put America on wheels. I love brass-era cars.

There was a lot of great stuff to see at the bash. Banks is building a Dodge Dakota extended cab pickup truck with a turbocharged 5.9-liter 24-valve Cummins diesel engine. In true racer fashion, he plans to drive to the Bonneville Salt Flats in October, run over 200 mph in it, and then drive it home. He calls it the World’s First Diesel Sport Truck, and says it puts out some 714 hp and 1160 ft.-lb. of torque. A few years ago, Banks went over 200 at Bonneville in a modified GMC Syclone truck. Naturally, he expects to do over 210 mph in this one. Not many guys can do that.

He also has a Camaro under construction with a modified Chevy V8 and two turbochargers. The engine develops 1600 hp. He’s building it for his 21-year-old son, Andrew. How cool is that? I couldn’t get my dad to do anything like that. Ever. My dad and I would argue about cars all the time. He’d say, “Whadaya want a stick shift for? Ya gotta shift all the time. Get the automatic.” And he’d insist, “Get the 6-cylinder. Whadaya want a gas hog for”. Who wouldn’t kill to have their dad build ‘em a 1600-hp Camaro? And it’s a street car. Back in 1984, Banks developed a 700-hp, 200 mph street-legal Firebird and built 70 copies. A special 1100-hp version went 239 mph. I’d like to have that one today. He also joined forces with POPULAR MECHANICS in ’86 and built a 1500-hp Trans Am that set a land speed record of better than 260 mph at Bonneville.

If you get the feeling that Banks never stops, you’re right. He’s working on patenting a new exhaust brake for diesel engines that’s more efficient than those noisy “Jake Brakes” yet doesn’t restrict an engine’s power output. He’s certain that diesels are the power plant of the future. 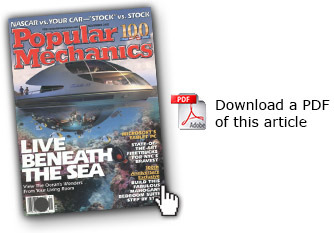 Be sure to check out how your world works at popularmechanics.com»