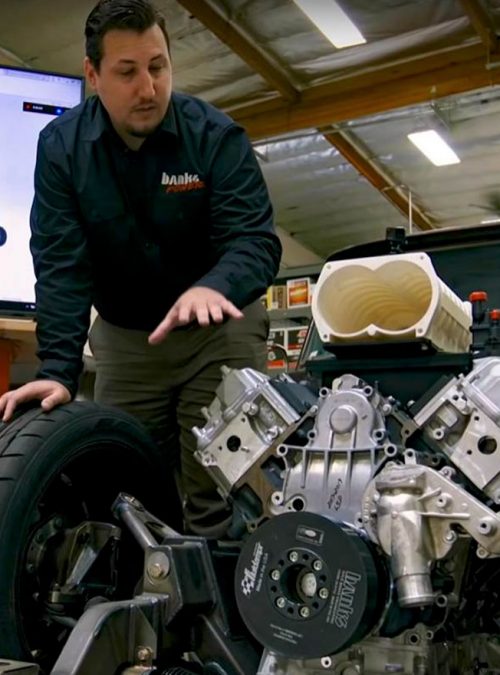 Forced induction, whether by way of supercharging or turbocharging, is a very fun thing. But it’s the supporting parts and pieces that go along with forced induction that help you get the most out of it. For its ability to cool the intake charge, increase intake air density and support higher engine efficiency, an intercooler is a supercharger and/or a turbocharger’s best friend. In forced induction applications that are void of an intercooler, you’re forcing a lot of hot, pissed-off air into your engine—and you’re killing your horsepower potential. In the automotive world, air-to-air intercoolers are commonplace, and the right unit can suffice under most circumstances. However, for the ultimate in charge air cooling an air-to-water intercooler is damn hard to beat.

When the folks at Banks decided to use an air-to-water intercooler for Project Lokjaw, the company’s supercharged and Duramax-powered ’66 Chevrolet C20, everyone knew they were serious about making horsepower. Turns out, thanks to Banks’ long history of manufacturing Duramax marine engines, the Azusa, California engineering firm is very familiar with how effective this type of heat exchanger is. On the street and in making it work within the confines of a rusty old ¾-ton pickup’s engine bay, it will come down to the packaging. Since dropping a hint about the air-to-water idea back in February, plans have already changed. Project Lokjaw will still sport an air-to-water intercooler and there will be no shortage of wow factor, but its design and dimensions have been revised.

Now that Banks is getting closer to wrapping up the SEMA-bound build, follow along below for a look at what you might just see on the finished product.

Here you can see the air-to-water intercooler Banks had originally planned to run on Project Lokjaw. Created for marine applications and typically located above a Duramax mill’s lifter valley, it houses a cupronickel-alloy core and also utilizes individual runner intake manifolds. Employed in a road-going vehicle, things get a bit more complicated, as a secondary heat exchanger other than the engine radiator might be required. However, for the efficiency gains you see over a traditional air-to-air intercooler, an air-to-water unit is beyond worth the complexity associated with it.

Being that Banks’ marine-derived air-to-water intercoolers spend all of their time exposed to salt water, the cupronickel-alloy core was designed into the unit out of necessity. A corrosion-resistant alloy meant it could last as long as the Duramax it was cooling. When you couple the high-tech core with the intercooler casting itself and the individual runner intake manifolds you had quite a package, but also one that would be very tall…too tall to fit under the hood of a lot of street vehicles.

The first thing you’ll notice here is that the air-to-water intercooler mentioned above isn’t present on the engine now. This is because the original unit sat eight to 10-inches higher than where the new design places things. The new, 3D-printed version that’s now in the mix makes the supercharger and intercooler arrangement roughly as tall as an LS application, which makes Banks’ L5P Duramax crate engine just as packageable as the most commonly swapped V-8 in the automotive world. In addition (and due to the new, reduced overall engine height), a wet sump oil system is back on the table.

Another major change is the positioning of the Whipple 3.8L Gen-5 supercharger. It will no longer be fed via the rear but instead will be fed from the front. The front-drive (shown here in CAD) will be located toward the driver side of the engine. Interestingly enough, the redesigned, lower-profile air-to-water intercooler forced the repositioning of the blower—but all indications are that these changes will be advantageous. Keep reading to learn why.

Favorable Biasing Of The Blower And Intercooler

Due to where the high-pressure fuel pump mounts at the front of the L5P Duramax lifter valley, the guys at Banks didn’t want to make it and its corresponding injection lines, fittings and sensors inaccessible. So, the new intercooler core was positioned rearward in the valley. In contrast (and in addition to now being front-fed), the Whipple will be biased toward the front of the engine, which works well due to the supercharger’s opening (located in the bottom of the unit) lining up smack-dab in the middle of the engine.

As stated, Banks rearward biasing of the intercooler made plenty of room for the high-pressure fuel pump in the valley. Within the Lokjaw series, Banks has expressed the fact that they would like to run the factory the L5P Duramax pump, the Denso HP4, and you can see it mounted on their mockup engine here. Unlike the CP4.2 high-pressure fuel pump found on the LML engine (’11-‘16), the HP4 features three high-pressure cylinders (vs. two) and is notably more reliable. The HP4 is also capable of producing 36,000 psi worth of rail pressure without issue, so there is definitely some horsepower potential right out of the box, not to mention squeaky-clean emissions.

Though all the details are yet to be hashed out on the fluid side of the air-to-water intercooler, Banks has stated that there will be a separate heat exchanger for the intercooler, located out in front of the radiator. Water fittings or a water manifold design will be present at the back of the intercooler core in the future. Also notice the massive, modular bell housing on the transmission. It belongs to an Allison 1000. Stay tuned for the low-down on this commercial-grade automatic’s internal mods in a coming article.