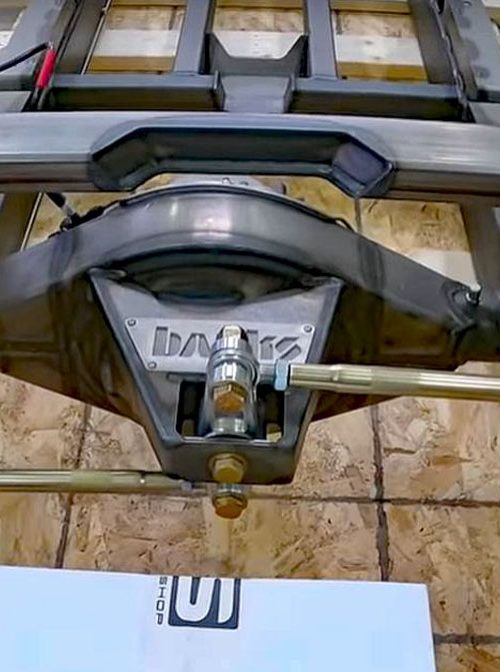 When your supercharged, air-to-water intercooled Duramax project with an Allison transmission and a Roadster Shop chassis isn’t unique enough, you enlist the help of Strange Engineering for a one-of-a-kind rear axle. As unbreakable as it is exclusive, the 9-inch based, hybrid rear axle destined for Banks’ Project LokJaw utilizes custom spindles and houses 35-spline chromoly axle shafts yet incorporates a late-model GM HD’s factory bolt pattern. Inside the pumpkin, you’ll find an Eaton Truetrac limited slip differential and a 3.89:1 ring and pinion from US Gear. It’s all part of Banks’ plan to ensure their bagged ’66 C20 holds up to the four-digit torque number the blown L5P Duramax will produce.

For a handful of years now, 9-inch rear-ends have campaigned in diesel drag racing with great success—so there is no reason one won’t suffice on the street. In addition to being highly durable, they save weight in what is normally a fairly hefty, ¾-ton or larger overall package. So without sacrificing strength, the guys at Banks are dropping weight and also getting the 180mm x 8 bolt pattern they’re after. Using the same materials and designs it implements in its axles intended for 3,000 to 4,000hp Pro Mods, Strange has built what is arguably the toughest 9-inch you’ll ever find under a pickup. You can read all about it below.

Consulting The Axle Experts At Strange

In keeping with the heavy-duty Duramax theme, the guys at Banks decided on an 8-lug axle very early on in the planning process for LokJaw. However, ridding the truck of unsprung weight was rightly emphasized by Gale Banks when the crew was discussing which route to take—which meant the iconic Ford 9-inch was on the table. And who better to build them a bulletproof 9-inch than a company that’s been doing it for six decades? From the outset, the folks at Strange Engineering suggested a hybrid-style, full-floating axle that uses the same chromoly floater spindles you’d find on a 3,000 to 4,000hp Pro Mod.

Strange’s full-floating design positions the floater spindle within the tube of the axle housing, so all of the torsional loads resulting from torque are absorbed into the outside of the axle tubes. Here, you can see the drive hub Strange manufactured, which is what the wheel will bolt to. A drive plate on the outside will connect to the actual axle shaft itself.

For maximum torsional strength, Strange wasted no time throwing its 35-spline, HyTuf axles into the build. These ultra-strong axles are forged from low carbon, high manganese, high nickel and high molybdenum steel, and the majority of the machining work takes place before the heat treat process each unit undergoes. This leads to consistent heat-treat depth and ultimately a stronger axle.

Coined a hybrid by the folks at Strange, on the outside everything is factory ’11-newer GM HD, but completely custom on the inside. This allows the guys at Banks to run the 8x180mm GM bolt pattern and the corresponding late-model brakes that go along with it while benefitting from Strange’s near-unbreakable 9-inch parts on the inboard side.

Coined a hybrid by the folks at Strange, on the outside everything is factory ’11-newer GM HD, but completely custom on the inside. This allows the guys at Banks to run the 8x180mm GM bolt pattern and the corresponding late-model brakes that go along with it while benefitting from Strange’s near-unbreakable 9-inch parts on the inboard side.

Working with the 35-spline axles is the legendary Eaton TrueTrac limited-slip differential. It’s the quintessential limited-slip differential in the automotive world thanks to its helical gear design that flat out works. Completely mechanical, a TrueTrac operates smoothly, quietly and acts like an open diff until it’s needed—making it perfect for street use. This particular 5-pinion TrueTrac calls for an aftermarket third-member case, which Strange had no problem supplying. As for ring and pinion, a 3.89:1 axle ratio gets the nod, with the set coming from US Gear.

Post-transmission power transfer resumes here through the use of one of Strange Engineering’s chromoly yokes. We can only assume this is the version that accommodates a 1480 series U-joint. Also notice the billet-aluminum pinion carrier assembly and the nodular iron case. Strange’s take on the 9-inch case is 8 to 10-percent stronger than stock and integrates seamlessly with its aftermarket pinion supports. The axle tubes are 3-inches in diameter and constructed from ¼-inch wall, DOM tubing. It might not be an AAM 1150, but it’s lighter and a hell of a lot stronger. Diesel-rated? You bet.

To keep the Strange rear axle centered under LokJaw at all times, Roadster Shop added a fully adjustable Watt’s link system. Given the amount of travel that will be available via air ride, this proven, old-school way of doing things will keep the axle from moving to one side or the other. We’ll fill you in on all the Roadster Shop chassis details soon.