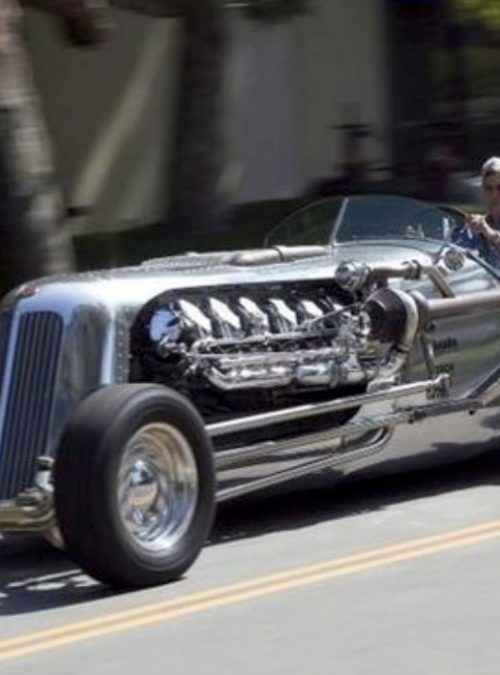 Jay Leno is without a doubt one of the biggest names in both comedy and cars, alongside Jerry Seinfeld. Over the years, his eclectic car collection has seen a wide variety of interesting modern and antique cars. His show Jay Leno’s Garage features many of them, and if you’re ever in Malibu on a Sunday morning, you may just see him driving one around.

One of the most intriguing cars in his garage is known as his “Tank Car,” but its official name is the Blastolene Special. And if the name itself doesn’t hint at it, this is one unique car.

When he first bought it, the Tank Car had no rear brakes, no headlights or turn signals. The tank engine made so much torque that a minor step on the gas nearly twisted the chassis, so it also had to be reinforced. Jay added big struts to the side and fitted the front end with a GMC truck axle. Jay also gave it a new six-speed Allison automatic gearbox and an entirely new electrical system.

The engine was later upgraded after the previous one spilt 70 quarts of oil all over a California road. The new engine was given fuel injection and twin turbochargers from Gale Banks Engineering. The power of the Tank Car almost doubled from 900 horses to 1,600 in the stable with a 2,900 rpm redline. The 30L V12 produces an even more impressive 3,000 lb-ft of torque and pulls the Tank from 0-60 in just 6.2 seconds – the equivalent of a modern-day Mini Cooper S. Top speed is over 140 mph and it can do a standing quarter-mile run in 14.7 seconds at 93 mph.

The best part about Jay Leno and his car collection is that he loves to enjoy his cars and share his extensive knowledge with the rest of us. If you’re lucky, he can be spotted driving his big Tank Car around Southern California, that or one of his other cars in his 400 vehicles collection.