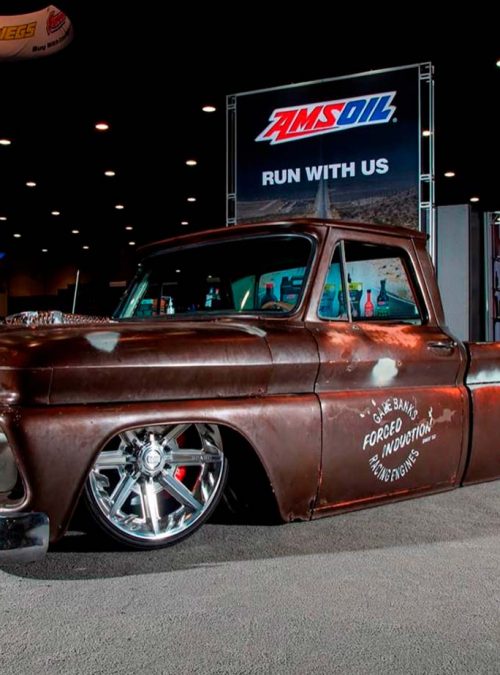 When it comes to custom car events, the SEMA Show is, without a doubt, the big dog on a global scale. There is no other automotive event that has a bigger impact on car culture—this show is more than just a meeting of customs.

Put on by the Specialty Equipment Market Association (SEMA), the objective of the event is to bring top aftermarket companies together to display the newest and most innovative products. In order to display these parts, companies get involved with the top builders to work the pieces on eye-catching vehicles.

The 2021 show was a bit different from the previous events as we had to skip a year due to logistical issues with the Covid-19 pandemic. Some companies were hesitant and backed out while others doubled down. All we can say is that it was a condensed version of the show and we found many exciting rides that topped our list. Without further ado, here are the top 10 pickup trucks from the 2021 SEMA show.

One of the hottest trends at the show this year was electric motor conversions. Yes, we have seen other notable electric-powered trucks, but they did not seem to be that functional. Legacy EV wanted to show that a conversion could be made that kept the bed of a truck functional.

The crew picked up an already clean 71 C10 and got to ditching the V8 gas engine for the electric conversion. They claim it has 300-hp 450-tq and a range of 200-miles on a single charge. Though the bed has a small added box for equipment, the majority of the new working parts were attached below and made the previous engine compartment available to make a Frunk (front trunk storage area).

When Keith Layne approached L&S Customs about restoring his vintage truck, he soon changed directions as he was inspired by other rides he saw on TV shows. The team then went all out and started with a JW Rod Garage chassis and switched out the 6-cylinder engine for an LS3 engine with 4L60E transmission.

The truck also received quite a few custom body mods like a full hand-built bed with hidden fasteners and PPG Canyon Beige Paint. It also sits on a set of Schott Accelerator billet wheels with 245/45ZR18 and 295/40ZR20 Nitto NT555 G2 tires.

Looking to create a truck version of ZR1 Corvette, Dale Dillon turned to Snakepit Customs to transform this ’57 Chevy pickup into a pro-touring beast. Starting with a Roadster Shop Fast Track, this truck is powered by a HP Tuners tuned and supercharged LT5 engine with 10-speed transmission for the ultimate in performance.

The fenders on the bed were widened and a rear diffuser along with four exhaust tips were installed to match the Vette inspiration. Taking things further are the carbon fiber features like the front bumper and rear tailgate by JW Composites and Design. Maximizing traction is a set of 19×10 and 20×13 Forgeline Black RS6 wheels with 275/30ZR19 and 345/25ZR20 luxury sport ultra high-performance Nitto Invo tires.

Known for making some distinctive large Chevy trucks, Rtech Fabrications has done it again with this unique ’72 Blazer. It’s 12-valve Cummins powered and sits on top of a 14-bolt rear end and Dana 60 front axle with use of a four-link suspension.

Using C-Series body pieces along with a heavy-duty K50 front clip and custom fender flare, the Bulldog is a massive SUV. Adding to the bulky and aggressive looks is a set of KMC wheels with 40×15.50R20 LT Nitto Trail Grappler M/T tires for competition-proven off-road traction.

As a way to pay back is wife for many years of supporting his dream of creating a top autobody shop, Ricardo Lopez of Customs by Lopez built her this ’56 Chevy pickup. It sits on a coil-over chassis and has a small block Chevy engine that is completely spotless.

Taking advantage of the shop’s capabilities, the body was reshaped and painted in a custom mix of House of Kolor silver paint. It’s also equipped with a set of 19×8 and 20×12-inch Budink Spyder billet wheels that were covered in 245/45ZR19 NT555 G2 and 315/35R20 Nitto NT555RII DOT-compliant drag radial tires for ultimate grip on the pavement.

Doug DeBerti has a long history of building groundbreaking trucks and his son, Brad now leads the way with some of the designs. Their newest creation is this ’65 Chevy C10 that is completely different from anything we have seen before.

Set with a Scott’s Hotrod’s chassis, the truck is powered by a Whipple supercharged LXS engine that activated the tandem rear axles. The body was completely customized to resemble a wild computer rendering. The bedsides were replaced by fender flares and upfront is a pair of flares by Advanced Fiberglass Concepts making for a very distinctive look.

We’ve seen RMD Garage build many high-profile classic Ford trucks, but none were finished to the level of this one. Sitting on a ‘bagged chassis, this truck was fitted with a Ford 440ci Big block engine with stacked injection.

The body was smoothed with a chop top, suicide doors, and a BASF pearl white paint job. Inside is a deluxe leather interior with inserts made from leather pulled from $15k Louis Vuitton luggage. Talk about a baller truck!

Starting with a long bed ’69 Ford F100 Ranger and a ’72 Econoline roof, the Kyker’s Rod and Custom crew created this full-sized Bronco concept. It tucks a set of 20 and 22-inch Billet Specialties Bonneville wheels with the use of a Chris Alston’s Chassisworks frame with Slam Specialties airbags.

Under the hood is a 429ci Big Block with C6 transmission to get it going. The interior is decked out with custom leather upholstery to complement the PPG Toyota Quicksand paint. This one-of-a-kind vehicle is so different yet so clean!

Though Electric conversions were all the rage at this show, Mike Copeland or Arrington Performance partnered with Redline Oils and Bosch to convert this ’48 Chevy to hydrogen power. From what they told us, this alternative fuel burns more efficiently and the only emissions are a small amount of N20 and water.

The truck is a bit unassuming as it has a supercharged 6.2L LS3 engine that looks like a normal gas engine. However, the fuel system was converted to feed it hydrogen so that the combustion engine now runs more efficiently than ever and sounds like a traditional gasoline engine.

When the Banks crew was sold this decrepit truck for a mere $1, their heads were spinning with ideas of what to do with it. After throwing up a few ideas, they settled on making a wild project to display their upcoming L5P diesel crate engine package.

This patina truck sits on a custom Roadster Shop Spec Series ‘bagged chassis to allow it to lay body on the pavement or the carpet of the Las Vegas Convention Center. The diesel engine has twin intakes to feed the Whipple supercharger for maximum power. This is surrounded by metal work from Empire Fabrication to cover the one-off Sparc Industries billet wheels with Nitto Invo tires.

Inside the cab is a set of Banks gauges with a MoTec monitor and ECU along with TMI Products seating. In the back, the bed was split to open up and display the rear suspension. Though this truck was not painted to a shine, it was definitely the wildest truck at the show!