Banks Engineering turns its attention from “Go” power to “Whoa” power with a new exhaust brake lineThe Grapevine. It’s a section of California’s Interstate 5 north of Los Angeles, that snakes its way through the mountains like an asphalt serpent—miles of undulating interstate with 6-percent grades, wind gusts that sometimes are strong enough to topple 18-wheelers, and summer heat that can leave a tow rig stranded by the roadside, steaming like a tortured locomotive. And if you’re traveling north, the coup de grace is yet to come: five continuous miles of 6-percent downgrade that eventually deposit you onto the floor of the San Joaquin Valley.

It’s not a friendly place for trucks, but it is the ideal place to test an exhaust brake—or, in this case, a new line of exhaust brake products from Gale Banks Engineering.

Similar to the company’s engine performance packages, Banks’ new exhaust brake products are offered in several, upgradable equipment packages to suit various needs and budgets. The Banks Brake is the company’s basic exhaust brake, activated by a dash-mounted toggle switch ($1,199). The Banks Brake with SmartLock adds a module ($395), which bolsters the exhaust brake’s effectiveness by raising transmission line pressure and locking the torque converter during braking. Then there’s the crown jewel of Banks’ efforts—the SpeedBrake ($1,895 for stock exhaust system), which incorporates a sophisticated user interface with a variety of features. More on that later. 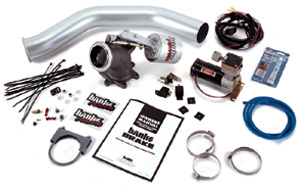 The key to the success of each of these packages is the exhaust brake itself. The housing, a Banks design, is a robust, cast-iron unit with an inside diameter of 3-1/4 inches that is bolted directly to the turbo’s exhaust housing. The stainless-steel butterfly valve and shaft were strategically placed 6 inches downstream from the turbine outlet to prevent exhaust turbulence, which causes flow restriction. In addition, the cross-sectional area within the exhaust brake housing is larger than that of the stock piece, which Banks says is worth a significant horsepower gain when the butterfly valve is in the open position.

High temperature shaft bearings require no maintenance and are protected by what Banks calls “dynamic shaft seals.” To prevent stubborn operation or outright sticking, Banks fits the housing with one of its BigHead vacuum-operated actuators, which measures a whopping 4 inches in diameter. Banks’ new exhaust brake products are backed by a five-year warranty on the mechanical components and a two-year warranty on the electronic components.

When the Banks Brake is activated, a small air pump applies vacuum to the BigHead actuator, closing the butterfly valve inside the exhaust brake housing. Realizing that this air pump could undergo thousands of duty cycles in its lifetime, part of Banks’ testing procedure included running the prototype pumps for 200 hours straight, then having them run through 10,000 duty cycles (simulating actual operation) before they were approved for use in the Banks exhaust brake packages.

The standard Banks Brake is armed via a dash-mounted toggle switch, and is activated by a micro switch attached to the throttle. Any time the throttle is released completely, the micro switch activates the air pump, and the butterfly valve is closed. Apply throttle, and the valve opens again. Adding the SmarkLock module to the Banks Brake system turns the truck’s transmission into an effective tool to slow down the tow rig even further. When the exhaust brake is activated, SmartLock simultaneously raises transmission line pressure and locks the torque converter. By creating a direct link between the engine and drivetrain, torque converter slip is eliminated, and the engine’s braking power can be fully exploited. A side benefit of this, of course, is reduced transmission-oil temperature; if the torque converter isn’t slipping, it isn’t creating friction and heat.

The top-of-the-line SpeedBrake has all of these functions, plus a user interface with a variety of features. Foremost is a control feature that allows the driver to set the desired maximum downhill speed through a function display and interface. As the rig descends the grade, the SpeedBrake modulates the exhaust brake valve and torque converter lockup functions to keep the vehicle’s speed at the desired setting. Automatic overdrive management automatically shifts the transmission out of overdrive while braking, and a status light informs the driver if the torque converter is locked or unlocked. Should the SpeedBrake not be able to hold the vehicle at the set speed, the letters “BR” or “DS” will appear on the display, indicating that the driver must apply the service brakes or downshift to keep speed in check.

There are other small, but important details incorporated into the SpeedBrake as well. For example, because the original equipment engine warm up valve is eliminated when the exhaust brake housing is installed, the SpeedBrake uses the exhaust brake’s butterfly valve to temporarily create exhaust restriction and warm the engine on cold days. Also, an automated maintenance feature cycles the exhaust brake valve every time the engine is started to prevent it from sticking. Finally, a diagnostic mode provides the driver with insight into the cause of a failure, should one occur.

In preparation for our testing, Banks engineers outfitted the test truck, a Power Stroke-equipped 2001 Ford F-350 dually, with the SpeedBrake, but segregated the system so that it could function as a basic Banks Brake, Banks Brake with SmartLock or SpeedBrake. That way we would have an opportunity to test the effectiveness of each package. It should be noted that 2001/2002 Power Stroke-equipped trucks keep the torque converter locked when the vehicle is in third gear and traveling faster than 25 mph. Earlier models do not have this feature, therefore braking capability is somewhat limited, according to Banks.

The truck was hitched to a trailer weighing about 10,000 pounds, which put total combined weight of the truck and trailer at 17,550 pounds. This is shy of the truck’s 20,000-pound gross combination weight rating (gcwr) limit, but gave us a decent load for the Banks Brake to control on downhill grades.

As usual, Banks engineers had connected a data acquisition system, which allowed us to monitor the difference in transmission temperature and line pressure between the Banks Brake (which does not lock the converter and raises line pressure).

On run No. 1, with no brakes applied, the rig had reached 65 mph at approximately 3,100 rpm within a mile from the start of our test, and was at 70 mph by midway down the grade, at which point we concluded the runaway testing for safety’s sake. The initial transmission-pan temperature was 146 F, with an initial transmission-cooler inlet temperature of 153 F. Slowing to 50 mph with the service brakes, we then downshifted into second gear at approximately 3,200 rpm. Speed dropped to 48.5 mph and remained at that speed for the remainder of the descent.

After climbing the grade and allowing the transmission temperature to normalize for a few minutes, we began run No. 2 with the basic Banks Brake connected.

Approaching the descent at 60 mph in third gear, we flipped the Banks Brake switch, which creates a barely audible hum as the vacuum motor began to pull the valve shut. Almost immediately, the vehicle began to slow, and the distant hum of the vacuum motor soon gave way to a soft whooshing sound as the exhaust pressure tried to push its way through the fixed orifice in the closed butterfly valve.

At the same point on the grade where our runaway test had netted 70 mph, the Banks Brake had us down to only 53 mph, without touching the service brakes. Slowing just a bit more to 50 mph we again downshifted the truck into second gear, and the rig slowed to 34 mph at 1,800 rpm. Pan temperature at the conclusion of run No. 2 had risen to 179 F, but the transcooler inlet temperature had risen 50 degrees to 231 F.

At the start of run No. 3, transmission line pressure was 100 psi. When the Banks Brake with SmartLock was activated, line pressure increased to 125 psi and speed once again dropped to 53 mph, and it held steady for half of the five-mile descent. We then slowed to 50 mph and downshifted into second gear, where the rig eventually came to a crawl at only 27.3 mph (which necessitated a move to the truck lane so we would not create a traffic hazard). Not only had the speed dropped another 6.7 mph with the addition of the SmartLock (over the Banks Brake alone), transmission temperature at the conclusion of run No. 3 was significantly cooler. Final transmission-pan temperature was 163 F, while the cooler-inlet temperature was 171 F. Using the SmartLock feature had indeed made a big difference – not only in performance, but transmission temperature as well.

These runs had indeed demonstrated the retardation abilities of Banks exhaust brake products, but what we were really looking forward to was the Speed Brake test. For this run, we set the Speed Brake interface at 60 mph, and approached the downgrade at 65 mph in overdrive. As soon as we released the throttle, the transmission downshifted into third gear, and you could hear that mild whooshing sound again, indicating that the exhaust brake was working. A glance at the interface showed the brilliant LED number “60”, as well as an illuminated dot in the upper left hand corner of the display that indicated that the torque converter was locked.

Because there is no room on the interface display to show a percentage of exhaust brake application, Banks Engineering cleverly use varying degrees of color to illustrate how hard the exhaust brake valve is working. If the speed you have selected glows green as you descend the grade, the brake is fully open. As it closes, the color shifts to yellow, then to orange, then to bright red when the valve is completely closed. On our descent, the color shifted between yellow and orange, indicating that the valve need only stay partially shut in order to maintain our 60-mph preset. And maintain it did; our speed never exceeded 60.5 mph.

Halfway down the grade, we selected 50 mph on the user interface. The color shifted quickly from a yellow-orange to deep red, as the exhaust brake completely closed in an attempt to hold our speed at 50 mph in third gear. Seconds later, the letters “BR” appeared, advising us to apply the service brakes to obtain the desired downhill speed. We then set the interface to 40 mph, applied the service brakes until we reached that speed, and downshifted into second gear, where the SpeedBrake held us at exactly 40 mph.

Whether you tow full-time or just occasionally, Banks has an exhaust brake product that will help you manage your load with confidence.