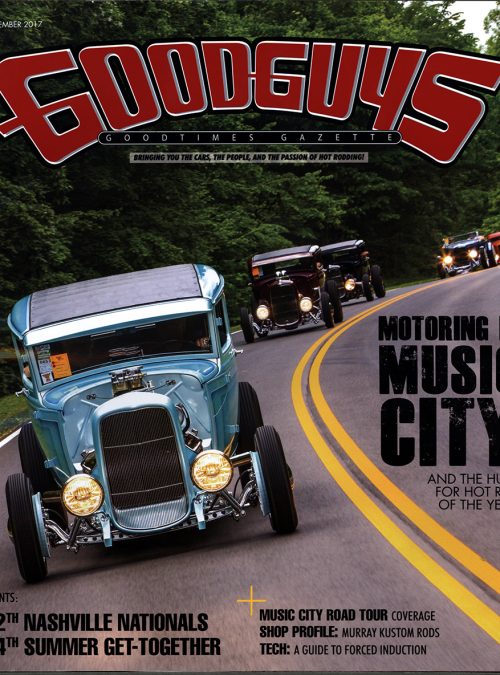 Growing up in SoCal during the post-WWII era was akin to living in a petri dish of hot rod innovation. Dotted across the L.A. metroplex was a cast of pioneers building a performance industry that continues to this day. Alex Xydias SoCal Speed Shop, Ed Iskenderian’s camshafts, Paul Shieffer’s clutches, Dean Moon’s equipment, George Barris’ customs, Ed Roth’s craziness, Mickey Thompson’s racers, and Wally Parks NHRA, to name but a few.

If you were a young boy caught in this vortex of vroom, with even the slightest interest in cars, chances are good your get sucked in like air through a Jimmy supercharger. Gale Banks was one such boy. Born in Hollywood in 1942, Banks came of age during hot rodding’s most fertile era. And while his father ran a furniture business and worked at the studios designing studio sets, Gale had designs on something else: a hot car.

When he was 14, his mothers 1931 Model A blew a head gasket and she assigned her son to fix it. Well, Gale’s idea of “fixing” it was different than his mothers. Over the course of a year, Banks transformed his mom’s daily driver into a demon hot rod: four-port Riley head, Jahn’s pistons, Winfield carbs, lightened flywheel, and home-built exhaust headers. Gale had found his calling.

At Lynwood High he focused on electronics and technical skills and he sold his first complete rebuilt engine to a fellow student. He showed his flair for ingenuity when he won a science fair with a remote-control lawn mower, blending mechanical and electrical insight. When he wasn’t studying, he would soak up knowledge by visiting Indy car chassis builders, such as Kurtis Kraft, A.J. Watson, Eddie Kuzma and Quin Eppedy

Next, Banks enrolled at California State Polytechnic in Pomona and at the same time launched his first business, CP Auto & Marine. At CP&M he focused on competition boat and car engines, plus odd jobs, like building chassis for Rose Parade floats. Remember, Gale was only 18 years old, a freshman in college.

He was a talented driver, as well and he proved it on the dry lakes and salt flats. In 1960, Banks set his first speed record at EI Mirage, 189mph, with a modified ’53 Studebaker. Four years later he pushed that ‘baker to 180mph at Bonneville, setting top speed in its class. By the late 60s, with his reputation and business growing, Gale opened an 800-square-foot facility on San Gabriel Boulevard (later expanded to 2,800 square feet) to accommodate engine blueprint and machining services. Two years later, Banks began focusing on racing boat engines, starting Gale Banks Marine Engines.

For the next decade, Gale Banks marine engines dominated boat racing, winning countless national titles in endurance and drag competition. One particularly impressive craft was The Crucifier. Powered by a Banks injected, nitro-gulping Hemi, the boat obliterated the record book in 1976 by winning every event and sweeping the National Drag Boat Association and American Power Boat Association Nationals. The secret? Banks unique technical know-how and liquid horsepower: “l didn’t own a Hydrometer,” he said, “the thing ran on 100 percent nitro!” But Banks didn’t ignore land based vehicles. He crafted the first integral turbocharger wastegate for Hot Rod magazine’s Turburban proved car, contracted with Volvo to boost (pun intended) horsepower of their 4-cylinder engines, and worked with the federal government on a Large Research Safety Vehicle program,  which  resulted  in  a front-wheel-drive car powered by a turbocharged Volvo B21 engine that met all 1985 emissions and fuel economy standards.

In 1978, Banks hauled the aforementioned Studebaker out of retirement and dropped in a 930hp twin-turbo Chevy V8. He promptly hit 217mph at Bonneville, earning the Fastest Passenger Car mantle. Meanwhile, his 850hp twin-turbo Bow-Tie marine engines were winning grueling endurance boat races in Mexico and New Zealand. His mastery of the boosted internal combustion engine proved absolute. And this was only the beginning of the Gale Banks performance saga. By embracing and perfecting turbocharger technology, for five decades Banks has redefined the limits of internal combustion engines. His achievements are nearly endless. The company-provided list of accomplishments runs 18 pages! From a restless teenager who loved to fiddle with engines, Banks now remains the hands-on president to the 100-plus employee manufacturing and engineering complex that today sprawls across 12 acres in Azusa, California.

A few Banks-inspired milestones must be noted:

Worked with GM to create a V6 for the Buick Regal, which led to the famed Buick Grand National performance model.

Teamed up with Pontiac and Popular Mechanics to build a 1,500hp, twin-turbo, intercooler big-block Trans Am running on pump gas, it set a new World’s Fastest Passenger Car record, with a top speed of 270-plus mph and a two-way average of 260.212mph at Bonneville.

Banks introduced DynaFact, the world’s first onboard, direct-reading, real-time dynamometer that indicates horsepower and torque as a vehicle is driven.

In 1999, the Teague-Welch-Banks Streamliner became the world’s fastest piston-driven car. The 530c.i. blown and nitro-fed racer hit 407mph at Bonneville.

General Motors granted Banks a worldwide exclusive to produce and sell marine engines based on the 6.6-liter Duramax diesel V8. You get the idea. C.J. Baker, longtime editor of Circle Track magazine, never stopped marveling at Banks’ accomplishments: “Gale is one of the giants in the automotive aftermarket, but he has never received the recognition he is due Gale has always produced products of the highest quality and reliability.

What makes the man continue to tick at age 75? ” I think I have always appreciated what was cool about automotive engines, Banks explained.” If an idea was new and technical and mind bending, appealed to me, and l was, and am. always looking for that next cool factor. Its an internal switch in my brain that l cant turn off. I am a futurist. It’s all about what’s next.”