For Decades, Fringe Hot Rodders Have Been Predicting a High-Performance Diesel Revolution. It Turns Out They Were Right. Expect Diesels to Be Smoking Musclecars at a Track Near You.

It’s like an eyewitness account of Jabba the Hutt showing up to an NFL training camp and running the 40 in 3.9 seconds. Poppycock! Aside from being a massively flabby extra-terrestrial slug, he got killed by some scrawny chick for goodness sake, and his existence is purely fictional. And what about these rumors of daily-driven 7,000-pound diesel tow rigs running 10s in the quarter mile? Preposterous! But what’s even more preposterous is that these rumors are entirely true

What’s been known by a small fringe group of enthusiasts for the past 20 years has finally started migrating into the mainstream. Diesels make for unlikely drag racing platforms, but ironically, it’s their extreme workhorse genetic coding that works to their advantage. Robust short-blocks (sometimes industrial-based), built to last hundreds of thousands of miles, and the beefiest of driveline components, built to endure the heaviest of loads, provide a foundation more solid than in most performance cars.

Although 10s are by no means the norm, 14- and 13-second e.t.’s are common and easily attainable with common hot rodding tricks. Typical tweaks include intake and exhaust mods, upgraded turbochargers, nitrous and propane injection, and electronic tuners that increase fuel delivery. Due to recent advances in electronics technology, most truck rodders opt for ’98-and-newer Dodge Cummins, GM Duramax, and Ford Powerstroke diesels. Here’s a rundown of how they work, where they race, and the future potential of diesel technology. 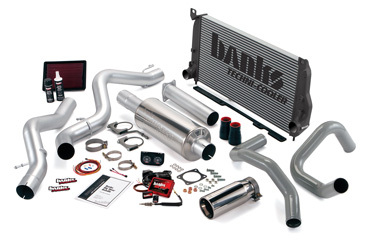 Understanding diesel-specific horsepower tweaks requires a quick lesson in diesel fundamentals. Compared to their gasoline counterparts, diesels produce enormous torque for a given displacement while delivering significant improvements in gas mileage. The reason is twofold. Diesels operate on the principle of auto-ignition, meaning that instead of relying on a traditional ignition system with spark plugs to light the fire, the heat produced from extremely high compression ratios (between 17:1 and 20:1) is what initiates the combustion process. Without spark and therefore detonation, the number-one assassin of gasoline engines is eliminate

A world of combustion where detonation never spoils the fun makes way for a natural marriage between diesels and power adders. That’s why every new diesel-powered production truck comes turbocharged from the factory pushing heady doses of boost, usually between 24-30 psi. Likewise, massive quantities of nitrous oxide can be injected without guilt, as well as supplementary fuels like propane. The big question is, can diesels handle that kind of stress? You bet. Their industrial roots dictate that longevity is the top design priority. Cummins projects the life span of its 5.9L straight-six at 300,000 to 350,000 miles, a shelf-life longer than the trucks they’re sold in.

Another feature unique to diesels is how they throttle. Since diesels operate on auto-ignition, fuel flow determines their rate of acceleration, not airflow as with a gasoline engine. Consequently, more fuel yields more power, and modern advances in OE engine management have prompted an influx of aftermarket electronic diesel tuners. Available from companies such as Banks, Edge, and Bully dog, diesel tuners install between the factory PCM and the vehicle’s sensors and actuators to increase fuel flow. They typically offer different levels of power that’s adjustable with a knob or a button.

However, although diesels never detonate and it’s damn near impossible to kill them with too much cylinder pressure, they’re not immune to the drawbacks of excessively rich air/fuel mixtures. Too much fuel washes out rings, contaminates oil, dramatically increases soot and emissions, raises exhaust gas temperature, and shortens engine life. Like all internal combustion engines, diesels are still just glorified air pumps and need additional airflow proportional to the extra fuel provided by a diesel tuner to operate properly. High-flow air intakes, larger-diameter exhaust system, bigger turbos, and intercooler upgrades help improve air-flow and air density. Used together, these parts provide gains of up to 150 hp and over 350 lb-ft of torque with a factory turbo.

The only real way to prove power is at the strip, and diesels are proving their mettle all around the country thanks to the Diesel Hot Rod Association. Six years ago, DHRA founder and CEO Eric McBride started drag racing his diesel truck. He hit up every event that involved diesels but quickly realized he and his fellow diesel enthusiasts got treated like secondhand citizens and weren’t taken seriously. “We wanted tracks to start treating us like other racers, so we thought forming a sanctioning body for diesels was the best way to fill our niche,” says Eric.

From there, Eric began networking with tracks and motorsports officials, and his hard work paid off. “We are now the first sanctioning body outside of the NHRA and IHRA to have member tracks all across the country,” he says.  “Each track agreed to enforce the DHRA rule book and run at least five races a year, although most hold 10-13 diesel races.” Member tracks include Pittsburgh Raceway Park, Maryland International Raceway, Virginia Motorsports Park, Rockingham Dragway, Moroso Motorsports Park, Beech Bend Park, US 131 Motorsports Park, Great Lakes Dragaway, Houston Raceway Park, San Antonio Raceway, Lubbock Dragway, Rocky Mountain Raceways, and Los Angeles County Raceway.

Now over 300 members strong, the DHRA’s biggest class is the Diesel Power Drag Racing Series where racers compete at each of the member tracks for points throughout the season. The points champion from each track is then invited to Houston Raceway Park in November to compete in the Nowel Thomas World Finals. The winner takes home $5,000 while the runner-up wins $2,500.  For the big dogs, there’s the Pro Street Shootout Series, where the quickest street-legal diesels in the country square off. The heads-up series features 3/4-and 1-ton pickups that must meet minimum weight requirements, but pack serious power. Races are held at Beech Bend, Indy, Atlanta, Vegas, and Houston with cash purses totaling $30,000.

THE FUTURE OF DIESELS

As stunning as it may be to watch 7,000-pound behemoths running with Corvettes and WRXs, it’s highly unlikely droves of consumers will snatch them up with the express intent of going fast. Yes, extremely lean air/fuel mixtures–60:1 at idle and 20:1 under normal driving conditions–offer significant advantages in fuel mileage. And yes, some European manufacturers like VW and Mercedes have been importing diesel-powered passenger cars in recent years. However, when it comes to cars, diesels have always been the mileage option, not the performance option. So is there hope for performance diesels in passenger cars? Possibly, but there are several design features that must first be addressed.

Due to the heavy-duty towing and hauling duties diesel trucks perform, they’re primarily low-rpm machines. In fact, most diesel truck motors are finished by 3,500 rpm. Generating such monstrous power and torque numbers at such low rpm requires extreme cylinder pressure, in incredibly stout blocks, heads, and rotating assemblies are necessary to survive the abuse. Furthermore, diesels aren’t just built to survive, but built to outlast the vehicles they power by a significant margin. How many cars are still in one piece by 350,000 miles? According to diesel expert Gales Banks, “For light-duty cars, there is a big downside to this torque output. Big torque means a big heavy engine, heavy transmission, a heavy drivetrain, and a heavy car.”

The answer may be as simple as lowering torque output. “I know torque is the heritage of a diesel, and big torque is great if you’re plowing a field, but we’re not doing that with light-duty vehicles,” says Banks. “Reducing torque output will allow us to build lighter engines, lighter drivelines, and therefore lighter cars.” Since horsepower is simply torque multiplied by rpm, considering current diesels produce roughly twice as much torque as power, higher engine speeds can still yield more horsepower even if torque is lowered. But there’s more to it than that. “Higher engine speeds require a stronger valvetrain, precise fuel management, and turbocharging for improved airflow. Done right, a diesel can produce peak torque early in the powerband and sustain power at higher rpm. Because of its advantage in area under the curve, a really torquey performance diesel can blow the doors off a gasoline powerplant even if they have the same peak horsepower.”

If the benefits of diesel are so obvious, how come no one’s building these proposed high-speed diesels? It is being done, just not in the United States.  Hefty fuel prices mean nearly half of all cars sold in Europe are diesel powered, and luxury cars from BMW, Mercedes, and Jaguar can be had with impressive performance diesels. BMWs 535d 3.0L straight-six diesel produces 277 hp at 4,400 rpm and 413 lb-ft of torque at just 2,000 rpm, revs freely past 5,000 rpm, and delivers 44.8 mpg on the freeway. A trick sequential twin-turbo setup and 16.5:1 compression ensures a broad powerband, and furthermore, the aftermarket Euro tuners at DMS Automotive (Andover, Hampshire, England) have bumped those figures up to 344 hp and 506 lb-ft of torque with simple electronics tweaks. The argument for why these motors never show up on our shores has always been our stricter emissions policies, but not everyone’s convinced. “That’s just an excuse for whiners who don’t want to put in the R&D effort. If manufacturers think there’s money to be had in it, they’ll figure out a way to make them work here,” says Banks.