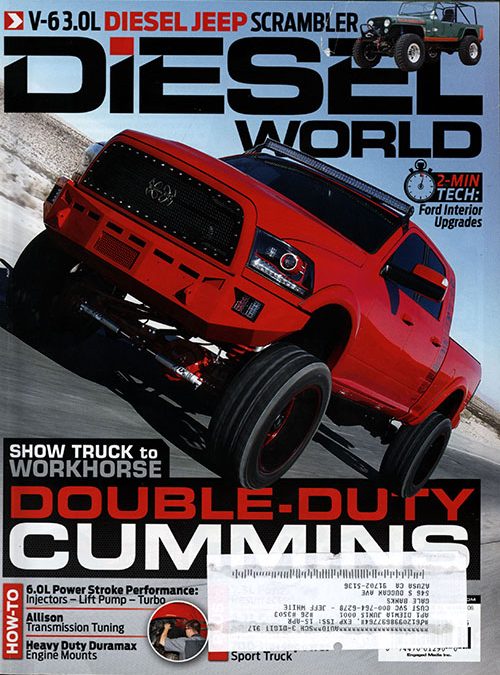 The Jeep CJ8 or Scrambler hasn’t been made since 1986, but now thanks to Winslow Bent and his team at Legacy Scrambler Conversion, this classic Jeep is now available as a virtually new, trail-ready rig. Yep, we said all new. This isn’t a worn-out old barn find that’s been repaired and upgraded. It’s the best of the reproduction parts available today, along with some superior fabrication and integration skills by the team at Legacy. Legacy Scrambler Conversion calls the package seen here the “ Dualsport Tdi.”

The Legacy Scrambler CJ8 sits on a custom frame from Throttle Down Customs. This frame is modeled off of an original Jeep  frame. This frame is made from 2x4x3/16 box tubing rather than the open-channel design of the original. The frame rails are mandrel bent. Its much stronger and will last longer than any OE Scrambler frame. lts designed to fit a PSC steering power box. The frame Is set up to utilize a custom, long-travel suspension, developed and built by Legacy utilizing Gen-Right components and King rollover shocks and bump stops. Since Scramblers are rare. And clean Scrambler bodies are even more rare, a new aluminum body from Aqualu was utilized. Aqualu makes two bodies for the Scramble-a standard-length unit and one with the tail bobbed behind the axle. Both bodies will fit the original or a Throttle Down customs Scrambler frame. For this build. the full-length body was used, as this provides more space for gear when taking long trips down the unpaved road less traveled. The aluminum body was fitted with high-clearance aluminum tube fenders from GenRight Off Road. The rest of the body pans, hood, tailgate. etc., are top-quality steel reproductions from Omix-Ada. A few Items, like the grille and headlights, are clean originals from a donor Jeep. The body was painted “Legacy DT Green” by Straightedge Auto Body in St. Anthony, Idaho. In the interior. the front seats are from Recaro and the single rear passenger seat is a Corbeau Safari Fold & Tumble Seat, designed specifically as a direct bolt-on. The gauges are from Faria. These are “digital gateway system” gauges that communicate with the H939 ECM system, lust like the newest trucks. Of course, this Jeep has A/C and gets it courtesy of a Vintage Air system. A Turfy locking center console sits between the seats for secure storage, and the stock glove box is still in place for maps. An idiot steering column replaced the original and the brake pedals connect to a Hydroboost unit under the hood. From there. the GM dual-circuit master cylinder sends the fluid out to the Wilwood disc brakes at each corner. With a modernized truck, modern differentials were a must. A Dynatrac ProRock 44/60 is found up front and a ProRock 60 brings up the rear. Gearing in the axles is 5.l3:l and trail traction increased when the ARB Air Locker is engaged. To distribute the torque to both axles, a 3.011 ratio Atlas II transfer case is mounted behind the six-speed automatic transmission.

The best part of this Jeep is the 630T V-6 diesel engine from Banks Power. The 630T is a 3.0-liter V-6 mill that puts out 240 hp @ 3,500 rpm and 420 lv-ft @ 1,500 rpm. It is tri-fuel capable, meaning it can run on diesel #2, bio-diesel blends and JP8. JP8 is a fuel used by the military, and you’re not likely to find it here in the USA for commercial use. However, you could run it if needed come the zombie apocalypse. Since every Legacy Scrambler is built from the ground up, you can order several options and upgrades. There are even two V-B gas engines available for your non-oil burning friends. However, that would create drastically shortened trail range.

The C18 was first introduced to the market in 1981 and the last year of production was 1986. the same year CJ7 production stopped in favor of the new Jeep Wrangler YJ.

Widely know as a “Scrambler,” this was actually the name for one of the appearance packages available on the CJ8. Others were Renegade and Laredo. which were, also use on the CJ7. The Scrambler name was only used on the CJ8. Perhaps this is why the name stuck.

The C18 is essentially a long-wheel base version of the CJ7. The CJ7  has a 93.3 inch wheelbase. while the U8 ls 148 inches overall. The CJ8 features a removable half cab. A bulkhead was installed behind the seats to seal the cab, thus creating a small, integrated, pick-up style box. Full-length soft tops and hard tops were available for full-length coverage from the aftermarket. On a historical note. Former President Reagan was given a CJ8 as a gift by his wife, Nancy, during his presidency. He used it on his ranch in California.

Under hood resides a 3.0-llter V-6 Banks 630T. This all-aluminum diesel V-6 puts out 240 hp @ 3,500 rpm and 420 lb-ft @ 1,500 rpm. It’s mated to a six speed automatic transmission. The transfer case Is an Atlas. From Advance Adapters, with a 3.0:l low range. The engine Is 50-State Emissions certified and well run on standard #2 diesel fuel. BioDiesel or IPB. Only a single battery ls needed to start this oil burner.

The competition-style shock hoops and cross brace support a Dual set of 14 – inch King coilover shocks. The wiring is both from Banks and Painless Performance, plus some work by Legacy. A little harder to see Is the Hydroboost brake setup.

A front stubby bumper, from GenRight, offers maximum tire clearance when wheeling in the rocks. This bumper Is fitted with a Warn Zeon 10S winch. This wench has a
10,000-lb capacity and if fitted with a winch rope. rather than a cable.

The front axle is a ProRock 44/60 from Dynatrac. This axle had the advantage of a lighter D44 with the strength of a Dana 60 on the outer ends. Both the front and rear axles are equipped with Wilwood disc brakes.

Looking down at the dash you can see the Farla gauges. Vintage air controls. twin-stick shifter for the transfer case and the shifter for the auto trans. The rear Axle is a ProRock 60 from Dynatrac. This axle is fitted with 5:13 gears. an ARB air locker and Wllwood disc brakes. You can also see the 1/4-inch steel sold plate on the fuel tank.

GenRight aluminum tube fenders are used front and rear. This front set is the narrow boulder design that provides maximum clearance when off in the rocks. Notice the vent in the side. This makes for easy install of the fenders and also allows for venting of under-hood heat.

Here you can see the two stage coils on the from 14-inch King shocks. The two-stage colts ensure a good ride on the street, and a bump-soaking second stage for off the pavement. You can also see the custom, heavy-duty helm joint steering setup. The Faria gauges are CAN buss compatible units that talk to the engine. via the ECM, lust like the new