Arnold, a retired Naval officer and internationally known tattoo artist, uses his truck as a daily driver and to pull his fifth wheel trailer. Every winter he and his wife, a former rock ‘n’ roll DJ of 30 years, pack up their trailer and head out of Sault Ste. Marie, MI where the snow fall can be incredible. “The snow fall here is one of the highest in the United States, so we head off to Vegas where we stay with family for 6 or 7 months.”

He and his wife are fully enjoying their retirement, but Arnold talks fondly about his tattoo shop. “I was a tattoo artist for 20 years. The best part of it was meeting people and finding out why they’re getting the tattoo, what’s the meaning behind it, and why they got their other ones. It was the best 20 years of my life.” Arnold went on to say, “I hated doing names on people and tried to talk them out of it, but sadly some people were really convinced things were going to last forever.” He went on to say, “I was featured in about 15 international magazines. It was a great time, but now I’m having a great time with my truck.” 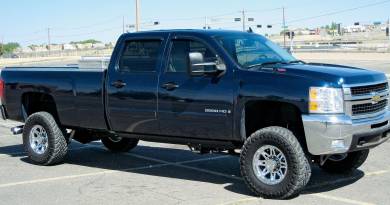