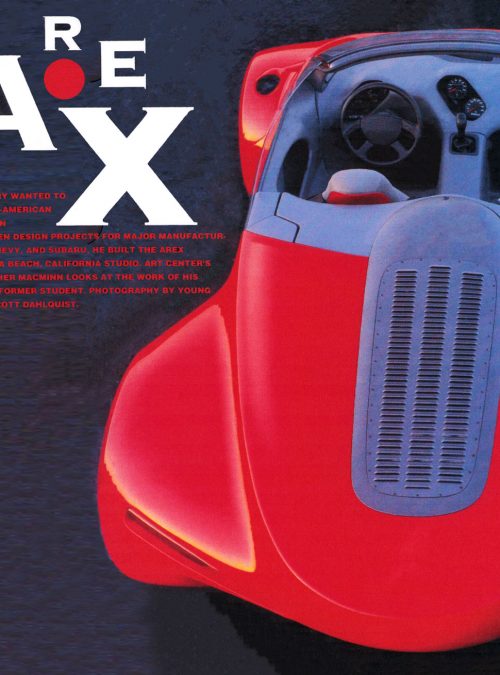 Outrageous thoughts race through your head as you listen to Dave Stollery reel off his car’s projected performance statistics – like 0 to 60 in 3.7 seconds, the quarter-mile in 11.3 seconds and (if your foot stays jammed against the floor) a top end of around 200 mph. Cool!

But what you’re really thinking is how that Julia Roberts look-alike in Business Administration II would come out of the Economics Building at 3:07 p.m. She’d walk right past that obnoxious frat boy’s whale tail Cabrio Porsche and give you that big smile as she gets in. You’d give your shades a check before providing her a sample of that 3.7 seconds on the way to paradise. But it isn’t the public display of tire burning that excites her so much as the way that this missile looks, sprawled there on the pavement like a giant fantasy painting. In fact, that’s just what Dave Stollery calls the ARID<. Unlike so many of today’s clumsy, ground-scraping sedans, the ARID< is not a tribute to aerodynamics. No, it’s an erotic concoction of massive muscles and a lean, mean fuselage that’s so beautifully skinned that you can’t keep your hands off it. That’s what car love is all about, folks.

Okay, so much for the preliminaries. When you do finally come to rest, there’s going to be a moment of truth when somebody says, “Hey, Bubba, pop the hood and lessee whatcha got in there.” Well, the reaction would make you think you were in church, judging by all the religious name calls. Gale Banks of Azusa, California is a master craftsman when it comes to delivering horsepower, which is exactly why Stollery turned to him for an engine. Banks built a twin-turbocharged Chevy small block VS that produces 585 bhp at 5,300 rpm, then hooked it up to a ZF 5-speed transaxle.

Banks takes pride not only in the power his motors produce, but also in the visual beauty of the machinery.