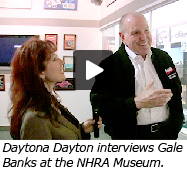 The exhibit, aptly entitled: “Banks Power – The First 50 Years” was kicked off with an afternoon media & VIP reception hosted by Gale Banks which saw some 150 invited guests visit the museum to preview the 3,400 square-foot exhibit.

From his admittedly humble beginnings in 1958 as a very young “engine entrepreneur” to his soon-to-be-bestowed (January 25, 2009) Distinguished Service Citation from the Automotive Hall of Fame, the business life of the man whose last name is the first word on all those “Banks Power” decals, was put on public display using hundreds of photos, racing films, engineering drawings, machine shop artifacts, a sixty-five foot long/200-item 1958-2008 timeline, and four actual record-breaking racing vehicles.

The four racing machines include three pickup trucks, a Chevrolet S-10, a Dodge Dakota, and a GMC Sierra.  The first and second machines are quite literally the quickest (drag racing) and the fastest (Bonneville) diesel pickups extant.  The Sierra has the distinction of being the first diesel road racing pickup truck.  A final machine in the exhibit hall is Banks’ stock-bodied Pontiac Trans Am that sizzled over the salt at a record-busting 267.618 miles per hour! 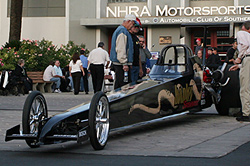 Outside, parked prominently on the plaza right in front of the Museum’s main entrance steps, was Banks Power’s very latest racing adventure/test probe, the Sidewinder Top Diesel Dragster, all twenty-six and a half snarling feet of it.

Handsome in its highly-fashionable carbon-fiber bodywork and exposed Twin-Turbo Duramax engine, the low-slung “digger” was a distinct “center of attention” parked as it was, right in the middle of the 300-car hot rod show that the Museum’s parking lot had been transformed into.  This Dragster is the first Banks race vehicle in a long time to have a fully exposed engine, and the effect was quite attention-getting, to say the least.

The exhibit, which opened officially to the public on December 4, will continue through the end of September 2009.  Many ancillary public events have been planned around the show’s run, and a number of other equally-famous Banks racing machines will be rotated in and out of the exhibit as the months go by.  UPDATE! The exhibit is going on! Call the museum at (909) 622-2133 for hours. 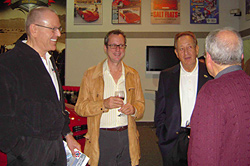 In his introduction to the media and guests Banks thanked Museum Executive Director Tony Thacker and his staff for the great honor and indicated that he shared it with all the people who have worked with him in his company over the years.  Banks then added that being honored by a museum named for his dear friend and mentor, the late Wally Parks, was a particularly emotional event for him.

Visitors can rest assured that repeat visits will yield not only different facets of the Banks legacy but constantly-changing exhibits in the rest of the Museum as well.  The NHRA Wally Parks Motorsports Museum is a living, breathing tribute to all facets of motorsports and the people who’ve made racing their lives and livelihood.

Celebrating its first 50 years in 2008, Banks Power is the leader in the design, testing, manufacture, and sale of complete high-performance engine and braking systems for both diesel- and gasoline-powered light trucks, SUVs, and motorhomes.  In January of 2009 Gale Banks was awarded a distinguished service citation by the Automotive Hall of Fame.  Banks is the first person in his chosen field to be singled out for this prestigious award which was first given in 1940.  www.bankspower.com