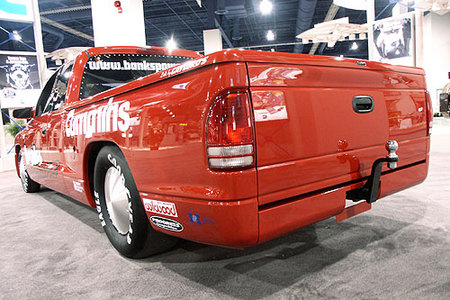 While returning from the Bandimere Diesel Drags in Denver, Colorado, the Sidewinder went to Las Vegas for the Association of Diesel Specialists Trade Show, a trade only affair held at the Mirage Hotel & Casino July 31 – August 2. En route, Sidewinder crew chief Sheldon Tackett stopped at a Cummins dealership just outside Las Vegas.

The plan was to display the World’s Fastest Pickup for a few hours, and maybe make a couple of smoky burnouts for the spectators. A number of interested fans, a few photographers (and even someone who looked a lot like Elvis) showed up for the appearance. Sheldon proceeded to do a few burnouts for the wide-eyed fans and then an amazing thing happened. Sheldon, returning from a burnout run, was challenged by a fellow in a C5 Corvette. The Sidewinder “smoked” the ‘Vette by five car-lengths, much to the disbelief of the Corvette owner – and the spectators at the Cummins dealership who witnessed the whole thing.

It’s great to have up to 735 hp and 1300 lb-ft of torque on tap for those unexpected challenges!