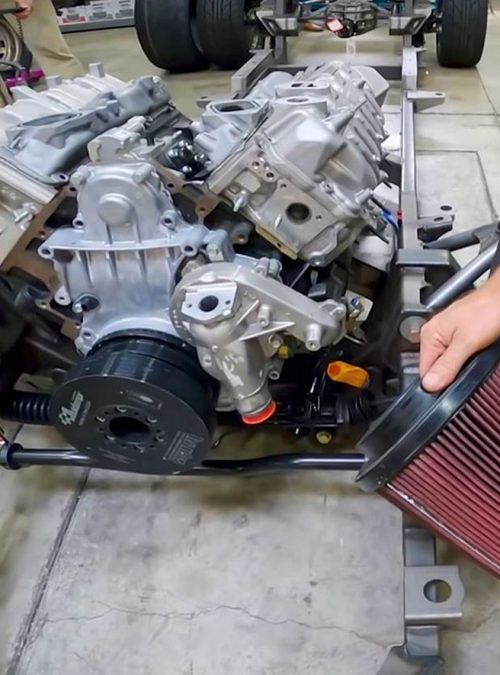 For a company that pays as much attention to air density as Banks does, did you really think they wouldn’t come up with a wicked intake system for their supercharged and air-to-water intercooled L5P Duramax? Think again. From the outset of the company’s wild, tire-melting ’66 C20 project, making clean, efficient horsepower has been the name of the game. That means a twin air intake configuration is on the table—and not a pair of moderately sized filters with run-of-the-mill tubing. Try 9-inch (od) air filters and 6-inch to 5-inch intake piping feeding air to the boost-building Whipple 3.8L Gen-5 supercharger.

Taking a cue from one of the company’s old Duramax road race endeavors, Mr. Banks wanted to revisit the style of intake system that flat-out worked when it was tried 15 years ago. By ramming air through the nose of the truck to the waiting mega-sized Banks Big Ass Filters, not only would the cooling stack benefit, but cooler, filtered air would be making its way into the blower. From brainstorming to laying everything out in CAD to getting to work out in the shop, the guys at Banks pulled this portion of the build off completely in-house, and you’ll find all the details below.

During a brainstorm session at the front of LokJaw’s engine bay, the guys at Banks mapped out a plan of attack for the air intake system. With Gale Banks spearheading the conversation, he suggested a system similar to what had been executed to perfection on the company’s Sidewinder Type-R road race GMC. Although that was a twin-turbo’d LLY Duramax application with dual air-to-air intercoolers, the same means of routing, cooling and filtering airflow could be employed on LokJaw. In it, dual air filter elements are hung below the front grille with all airflow coming in through the nose of the truck to cool the engine, drop boost temperature and be filtered by a pair of massive elements. Better yet, you get ram pressure off the nose as the speed of the truck increases.

Promoting Airflow Through The Truck’s Nose

Maximizing the intake system’s full potential would require collecting air in the most efficient manner possible. This means eliminating the detrimental ways air can hit the truck from both above and below it. As for the air filters, the plan was to have them reside in canisters with a vertical slot located in the radiator core support allowing additional air in. And in an effort to keep the engine from ever ingesting water, each vertical slot would be equipped with a rain shield—and each canister would feature drain holes in the bottom.

As for the filters, the guys at Banks are thinking big. Each element has a 9-inch outer diameter on the ceiling flange and a 6-inch od on the outlet, with 6-inch to 5-inch intake tubes linking them to the blower inlet. However, to mount them where they want them (vertically, behind the core support), lock-to-lock tire and wheel clearance and full droop suspension clearance has to be considered. Another area of concern is the lack of real estate that will exist between the engine and radiator once the blower drive pulley and its corresponding belt are added. Luckily, they’ve got a coherent plan of attack for handling that, too.

Reworking the factory valance and adding airflow holes to the front bumper were on the table during the initial brainstorm session as well. The use of a scoop was also considered as yet another means of getting as much air into the nose of the truck as possible. In the end, the truck’s original grille ended up being something that was changed in order to accommodate the custom air boxes.

From Design To Production

With the engine bay measured, the air boxes were drawn up in CAD. That was followed by cutting out the sheet metal required to build them and arranging all the pieces for assembly (notice what’s on the floor). In this 3D image you can see how airflow feeds into the air box. The inlet will protrude into a new grille off of a ’60 Chevy. Chosen for its dual headlight design, the inward head lamp on each side of the earlier style grille will be used as the air box inlet.

After piecing the puzzle together, the first test fit of the air boxes was conducted. The result? Each canister accommodated its massive air filter perfectly. Then it was time to move on to ensuring they could be integrated with the C20’s core support. That would call for a fair amount of reworking and cutting, which was also handled in-house at Banks.

Above, you can see the airboxes installed in LokJaw’s modified factory core support. With everything tacked in place, it was time to send it off for welding. For one last note on airflow across the front of the truck: the A/C condenser will be mounted out front (for optimum comfort in the cab), followed by the low-temp radiator for the air-to-water intercooler and finally the radiator for the engine.